I have absolutely no idea how I am going to recommend this to other people, or even what I may end up actually having to say about it, but let me make clear from the very beginning that Paterson is an absolute delight from start to finish, largely thanks to the captivating presence of Adam Driver in a lead role that allows him to once again show why his career has gone from strength to strength over the last decade.

Driver plays Paterson, a bus driver who lives in the town of Paterson, New Jersey. He has a routine that seems to work for him. Work, catching up with his wife (Golshifteh Farahani), walking the dog, and enjoying a beer or two at a local bar. He also works on a variety of poems, influenced by the work of local poet, William Carlos Williams.

Directed by Jim Jarmusch, who also wrote the script, based on work by William Carlos Williams and Ron Padgett, Paterson is one of those slight films that feels about nothing while paradoxically feeling as if it may just hold secrets to the best way to get through modern life. If you take anything away from the film then perhaps it is how easy it can be to make the everyday and mundane into something poetic and worth taking note of. Even a matchstick is made into something beautiful and memorable here.

Although it wouldn't be half the film it is without Driver in the lead role (I could close my eyes and listen to that man read the phone book, but his ability to remain deadpan and calm despite whatever happens around him is also a big plus), Paterson also boasts a talented selection of supporting players. Farahani does well in her role, helping to make something more of a flighty character who could easily have come across as more annoying. Because it's hard to stay onside with someone who dreams of increasing their cupcake sales while trying to become a . . . country music artist. Barry Shabaka Henley is Doc, the owner of the local bar, and Chasten Harmon and William Jackson Harper are a couple of people who aren't in a relationship, despite how much Harper wants them to be in a relationship. Sterling Jerins is a young girl who shares a lovely little poem with our lead, and Masatoshi Nagase pops up to share a moment of appreciation for William Carlos Williams.

This is absolutely a film that you can go without seeing, it doesn't really say anything new or say it in a completely original way. Yet it's a rewarding and worthwhile experience, and one of my favourite viewings from the past month or so. Sometimes you don't need a story telling you something new, sometimes you don't need innovation in the storytelling techniques. A reminder of things buried away in the recesses of our mind can be just as good, a nudge to get us willing to look at things from a slightly different angle, be it a matchstick or time spent without a mobile phone (Paterson doesn't have one, which is perhaps what enables him to spend more time capturing imagery more poetically). 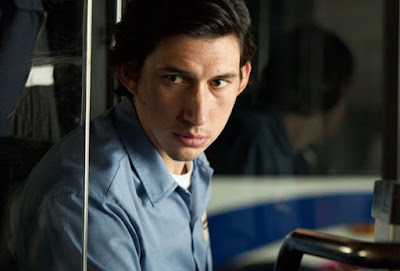