The Baby is possibly the oddest, and oddly brilliant, film that you have yet to see. And it's easy to understand why. First of all, I don't think it was easily available for many years, at least not in any physical format. Second, the advertising makes it seem like something quite different from the film it actually is. Third, it's not one that people see and rush to recommend to everyone else. So here I am, recommending this to everyone else.

The plot, on the surface, is quite simple. Anjanette Comer is a woman named Ann Gentry, a social worker (basically) who takes an interest in the Wadsworth family. Her main concern is with the baby (played by David Mooney, billed as David Manzy). Baby is actually a grown young man, but he has been kept as a baby, either through his own state of mental health, the way his family has decided to treat him, or both. Mrs. Wadsworth (Ruth Roman) doesn't take kindly to having her parenting method questioned, and things become more tense between Ann and the Wadsworth family.

Writer Abe Polsky doesn't have a very big filmography, only four movies and some TV work, but if any of his other features come close to this then I will have to check them out. He takes what could easily have been a laughable, clumsily-mishandled, concept and creates enough interesting shading in a number of the main characters to make it all work, and work well. It helps that he peppers the film with some jaw-dropping moments, and leads viewers to a very rewarding, and ever-so-dark, finale.

Director Ted Post has quite a few more credits making up his own body of work, but I cannot think of any that come close to this. He works well with the script, and takes turns showing viewers things to make them uncomfortable before then moving back to keep other moments more disturbing by allowing viewers to extrapolate and imagine how bad things can get.

Although we're now aware of adults who have spent time acting like babies (to do with giving up control and regressing to a state of . . . well, I cannot explain it as I don't understand it), thanks to the likes of Jerry Springer and online access to show a wider variety of lifestyle choices and kinks and fetishes, The Baby holds up so well nowadays because the man at the centre of it all IS seemingly a baby, despite his physical appearance. This isn't played for laughs, and perhaps back in the early '70s this would have been even harder for people to view as a piece of schlocky entertainment (considering how many American households had to adjust their homes a lives to veterans who had returned from the Vietnam War with less mobility and independence than they had before they went). It's handled perfectly, without spoonfeeding viewers (no pun intended).

A big helping of praise has to go to Mooney for his physical performance in the titular role. He's arguably the only innocent character onscreen, and even his worse moments have to be dismissed as simply the behaviour of a baby. Comer is very good, acquitting herself very well opposite Roman, who does her best to dominate every scene she is in. Marianna Hill and Susanne Zenor are fine as the two females who make up the family unit, Michael Pataki is amusingly sleazy for almost all of his screentime, and Erin O'Reilly does well with her small role, a babysitter involved in the strangest and most twisted moment. 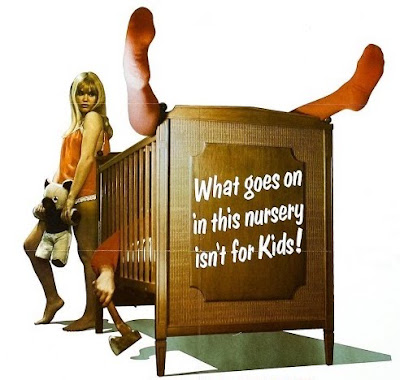