And here is my second review for this year,
Of a film that is overloaded with good Christmas cheer.
It's an animated retelling of a Dr, Seuss tale,
But does The Grinch succeed, or does The Grinch fail?

I watched it last week, with hopes not raised high,
Even the cast could not help me stifle a sigh.
Benedict Cumberbatch, Rashida Jones, and more,
Would they be any match for the casting from before.

First we had Karloff and then we had Carrey,
Both of those versions kept me happy as Larry.
But this boasts animation from Illumination,
Is it just a distraction or artistic creation?

Scott Mosier and Yarrow Cheney co-direct,
Not two names I would first choose to select,
But they're in charge of this cartoon presentation,
That ultimately wallows in creative stagnation.

The animation is nice, the voice cast not bad,
But nothing improves on the other's we've had.
You get what's expected, no more and no less,
It's shiny and new, but far from the best.

The characters are cute, some gags make you grin,
Whoville looks pretty, but lacking something within.
And the problem with Cumberbatch, his accent, I'm sorry,
He's clearly binged House and is copying Hugh Laurie.

The screenplay is dull, there aren't any good songs,
What the film gets right it outweighs with the wrongs.
So I got an idea! An awful idea!
This review was that wonderful, awful idea!

If you're thinking this is a waste of your time,
I can only apologise for trying to rhyme,
But it was better than other ideas that I had,
To say the film was not great, while not entirely bad.

It is what it is, which is nothing mindblowing,
Though I'm sure it will amuse you while outside it's snowing.
I'm no Dr. Seuss, but this review was fun.
I hope you were amused, and now it is done. 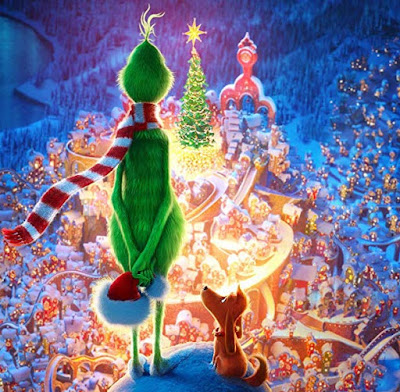