There usually comes a point while watching a remake when you have to make a conscious decision to forget the original movie. Some movies make that impossible. If a film is going to slavishly copy what has been done before then you just can't view it as one individual work of art. The same can happen, however, if the film moves too far away from the source material, making you wonder why they even bothered to create it as a remake.

I really like Inside, the 2007 horror movie from Alexandre Bustillo and Julien Maury that came along with a number of other extreme French horror movies during the first decade of this century. The two then followed that with Livid, another wonderful horror film, although one with a much more dream-like atmosphere throughout. I've not yet seen Among The Living, for all I know they may have been three for three at that point. I know that all seemed to be going well for them until they were tasked with delivering audiences Leatherface.

But I digress. I had deferred my viewing of Inside for so long because of my love for the original movie. I just didn't have any faith in a remake doing it justice. Enough time had passed though, so I figured it might finally be safe to give it a go.

The main story is the same, as you might expect. Things start with a car crash. Rachel Nichols is Sarah, a survivor of the crash. She's also very pregnant. It's Christmas Eve, Sarah is struggling with her loss, and considering what to do as motherhood approaches, when there is a knock at the door. It's a woman (Madeleine, played by Laura Harring) who seems to know Sarah. When refused entry, Madeleine eventually finds another way inside. She wants to take Sarah's baby, and will stop at nothing to get it.

The good thing about Inside is that it casts two women in lead roles that I always think should have more films under their belt. Nichols and Harring are both women I look forward to seeing onscreen, and both do their best with the material here, Harring having a bit more fun in the role of the villain (as you might expect). And that's about it for the praise portion of this review.

Inside is terrible. It mishandles any moments that it lifts directly from the original, and it also makes changes that don't work, despite obviously being put there to add some potential scares, tension, or kills. One main example is giving Sarah some hearing loss, which then allows her to have a hearing aid that can be lost and gained, depending on how director Miguel Ángel Vivas wants a scene to play out. Vivas also worked on the script, alongside the talented Jaume Balagueróand Manu Díez, and it's almost impossible not to put all of the blame for the lacklustre feeling of the final product on his shoulders. I cannot recall the last time I watched a horror movie that alternated so erratically between either underplaying or overplaying the scares. None of the BIG moments work as they should, leaving viewers underwhelmed, and simply bored, as it all winds to an ending that, well, I won't spoil . . . let's just say that it also fails to prove worthwhile when you think of the ending to the original movie.

Cynically designed to appeal to those who don't want to watch a nasty horror film with subtitles, this is the worst kind of remake. It loses the power of the original, mishandles everything that was done so well the first time around, and never shows an ounce of courage. Pitiful. 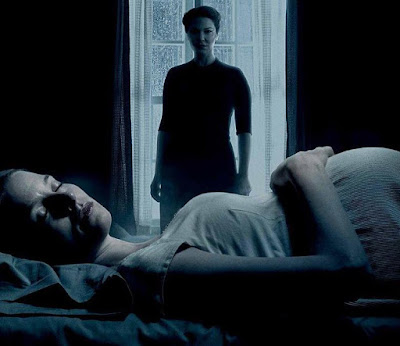