Urgh, how many times does it happen? You go round to visit relatives during the Christmas holidays, they seem a bit edgy, and then you go and find out that they've only gone and bloody trapped the devil in their basement. That's all well and good, Uncle Brian, but are you putting out any more Doritos to let us mop up this home-made salsa dip or what!

Written and directed by Josh Lobo, his feature debut coming along a couple of years after his work on the wonderful Dave Made A Maze, I Trapped The Devil is exactly what I just described. Minus the Doritos dilemma. Matt (AJ Bowen) and Karen (Susan Burke) drop in to see Steve (Scott Poythress). Steve doesn't seem too relaxed, and it is eventually revealed that he has trapped the devil in a room in his basement. That's hard to believe, of course, and the film plays out as Matt and Karen try to help Steve, all while becoming more and more wary of whoever, or whatever, has been trapped.

In many ways, Lobo has done himself proud. He's assembled three good cast members, sensibly created a premise that forces everyone to stay in a single location, and has a good idea right at the heart of things. Unfortunately, he doesn't do enough with any of the elements. The idea isn't ever explored in a satisfying way, nor extrapolated to turn into something that had the potential to be ten times more interesting, the cast spend too many scenes (almost the entire movie, really) just arguing with one another, and even the location is mistreated. You don't get enough geography reminding you of the exact dimensions of the house that the main characters are in, and there are sequences showing visions that could step outwith the confines of the building yet don't.

In fact, it's a very good job that Lobo managed to attain the services of Bowen, Burke, and Poythress, all of whom do their absolute best to make the script work. They can't quite manage it, but nobody could. Instead of interesting philosophical tangents and musings on good and evil, and what can be done to stop one while promoting the other, Lobo is happy to have characters effectively go round in slightly decreasing circles. Some details come out while viewers wait to see how things will end, but they're revealed and then discarded, like so many ripped paper hats after a lively dinner party.

The technical side of things is where the film also wins some points. Despite the obvious low budget, Lobo creates some interesting moments, creating the atmosphere of a feverish nightmare throughout, with a couple of standout images in the aforementioned visions.

I may seem a bit harsh on this, I Trapped The Devil certainly deserves praise for at least trying something a bit different from so many other horror movies, and also having it set on Christmas Eve, which you could also choose to consider as a deliberate choice, considering what is celebrated at that time of year. Is that what Lobo intended? I'm really not sure, but he gives us a couple of good scenes and a great last minute. It's just a shame that the journey wasn't any better. 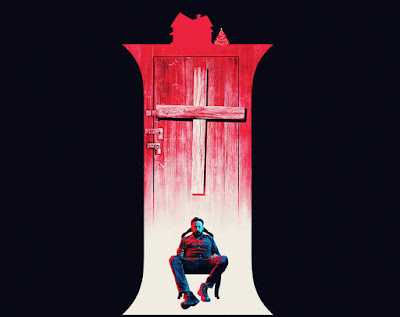