One of those films I had heard about over the years, but without knowing what it was REALLY about, Two-Lane Blacktop is, it turns out, a film that takes some archetypes and uses them to explore life as a petrol-head. I'm not going to try to explore the extra layers here, but I think it's worth mentioning that there's definitely a bit more to it than JUST people driving in fast cars.

James Taylor and Dennis Wilson play The Driver and The Mechanic, two men who are travelling across America, racing other drivers along the way. They pick up The Girl (Laurie Bird) on their travels, and end up making a big wager with the driver of a fine G. T. O (Warren Oates). The winner will have an extra car, but it soon becomes clear that the race is actually secondary to the appreciation of the vehicles they are driving.

Tonally akin to something that crosses the work of Walter Hill and Richard Linklater, Two-Lane Blacktop is very simple, in so many ways, and yet also impressively insightful into the mindset of those who view the car as the means of freedom to go wherever they like, without knowing where they may want to be going.

The script, by Rudy Wurlitzer (credited as Rudolph Wurlitzer) and Will Corry, is deceptively slight, stitching together a number of driving encounters (Harry Dean Stanton stands out, despite his short amount of screentime) and allowing time for the meandering conversations of the main characters to form a kind of passive philosophy.

Director Monte Hellman excels at keeping things focused where they should be, either on the characters or on the road ahead. The more sedate in-car moments are well-shot, and you really get a sense of speed when anyone puts their foot down harder on the pedal. Much like any long car journey, you get a mix of exciting thrills and more common "downtime", although those hoping for some kind of stunt-filled racing flick will be sorely disappointed.

Taylor and Wilson aren't all that memorable, essentially establishing themselves to anyone else in relation to the cars, but Bird does well with a role that could have easily been irritating, and Oates is exceptional, an older driver who isn't quite on the same wavelength as the younger men, but certainly has an idea of the experience that they keep seeking while driving along.

Exploring one of the modern mythical elements of America, the freedom of the open highway (all countries have roads to drive along, but there's something . . . extra about those that cut across the USA), Two-Lane Blacktop wonders if it is all it is cracked up to be, and may even leave you wondering if the chance to experience it, in such a pure way, was ever really there. 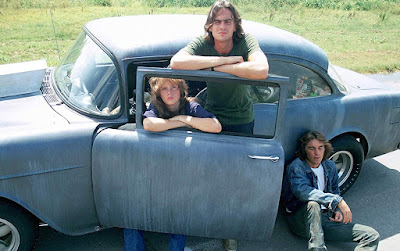