Although many would view this with some trepidation (it is, after all, a Christmas TV movie built around the brand of Dolly Parton and her theme park), I was optimistic. Director Michael Robison has quite a few of these under his belt, as does writer Nina Weinman. It would get me nostalgic for The Wonder Years (as any star vehicle for Danica McKellar would, she'll always be Winnie to so many of us, especially us Kevins). And it would benefit from the presence of Dolly, although I was under no illusions when it came to how much screentime she might have.

McKellar plays Rachel Lewis, an event planner who returns to her Tennessee home when given the chance to plan the titular Christmas at Dollywood. This sees her paired up with the head of operations, Luke (Niall Matter), who is also pursuing the General Manager vacancy, and doesn't see the need for Rachel to be given the responsibility. After an expectedly bumpy start to their relationship, things expectedly smooth out, and the pair soon recognise that they can work well together. They also have an interest in seeing one another outside of work.

And there you have it. The woman returning to her home town. The professionals also making time for the truly special moments of Christmas. A slippery slope towards what may be true love, with a stop or two on the way for hot chocolate and peppermint treats.

Weinman's script is about as safe as you can get (unsurprising, considering they are also using that Dolly name to sell this), but that ensures that this is right in the middle ground, when compared to all of the movies of this type. There aren't any great set-pieces, nor are there any moments that will make you cringe (well, not if you've seen enough of these without cringing already). Robison's direction is professional and light, showing his confidence in the leads, and the big star name, to let this pleasantly meander through the glimpses of Dollywood that we get to see, and of course it was shot on location there. Although all of these movies have the look and feel of a TV movie, this really makes the most of the resources at their disposal, and manages to feel as if it was given a little bit more money, and just a bit more polish. That may not have been the case, but Robison makes it seem that way, and good on him for the end result.

McKellar and Matter work well together. I wouldn't say that sparks fly, there's no snow-melting heat coming off either of these two individuals, but they're both appealing enough individually, making their scenes together little more than a pleasant waiting game en route to the predictable ending. Zoë Noelle Baker is less annoying than some child actors I have seen lately, so her turn as Ava, Rachel's young daughter, do nothing to harm the picture. The same can be said of the supporting turns from Christine Cattell (Rachel's mother), Garwin Sanford (Rachel's father), and Pauline Egan, the woman who really gives Rachel her big chance. And you get a little bit of Dolly. Not much, but just enough to be reminded of why she's remained such an iconic star for so many decades. She doesn't come close to the kind of performances she gave when actually playing other characters, but she does well enough.

Dollywood may not be enough of a gimmick to make this more appealing to the majority of people who watch these movies, but it's a nice bonus for those who are fans of Dolly. And why wouldn't you be a fan of Dolly? 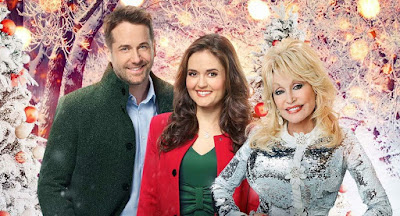