Although not exactly dripping with tinsel and bright baubles throughout, Holiday Hell has enough Christmas elements contained within it to count as a Christmas horror movie, and I am counting it as such. It's an anthology film, with the wraparound story concerning a young woman (Amelia, played by Meagan Karimi-Naser) looking for a perfect last-minute gift for her sister. That's her reason for being in a strange shop, owned by a shopkeeper played by Jeffrey Combs, and leads to her hearing some tales about the items available to buy.

The first tale is "Dollface". It's not good. A group of irritating teens hang about in a house where something bad happened. Something bad happens. Next up is "The Hand That Rocks The Dreidel", a tale that gets a bonus point from me simply because of the quality pun power of the title (which I am sure I have used myself, as well as From The Dreidle To The Grave, when thinking up ideas for Hanukkah horrors). It's about a boy and his new rabbi doll, which is definitely the kind of odd gift that kids sometimes receive and isn't really just a movie plot device, honest. Third, the best of them all, is "Christmas Carnage", the story of a man who goes over the edge while wearing a Santa suit. Last, and surprisingly forgettable, is "Room To Let", before viewers head back to the store for one last time.

Okay, aside from Combs and Karimi-Naser, what can I tell you about Holiday Hell to recommend it to you? Joel Murray is the damaged individual at the centre of the madness in "Christmas Carnage", and that is definitely worth your time. What else? Nothing, sadly.

Written by Jeff Ferrell and Jeff Vigil, who also directed alongside Jeremy Berg (who is the only name I recognise here, having previously given us The Device, which was okay) and David Burns, this is a shockingly lazy piece of work, slapped together with the minimum amount of thought and effort, utilising genre tropes that we've seen so many times before, and usually done a lot better than this. Even the best tale is something that we've seen in plenty of other movies, in terms of both the mad Santa moments and also the downtrodden male figure twitching and seething until he snaps and gets his revenge on all those he feels wronged him. It's fine to work with familiar elements of the genre, of course, but there's a sense in every tale that those involved think they are giving things a fresh spin. They're not. Unless coating them in a thin layer of excrement amounts to the same thing.

Christmas and horror go together like Christmas pudding and custard. From the fireside tales of creepiness to the more modern staple of the killer Santa, or killer Krampus (and be wary when checking out any film that has tried to get some extra viewers just by sticking the word Krampus in the title). So it's surprising that nobody has really managed to put everything together into a more effective seasonal horror anthology. A Christmas Horror Story managed to be okay, All The Creatures Were Stirring tried, but wasn't too successful, and we're left with the realisation that none of them have yet to give us something as good as the "All Through The House" segment in Tales From The Crypt. Which is a great shame.

Avoid this one. Even if you're just trying to kill some time after overeating during the holidays.

It's here, if you're American and wanting to waste some cash. 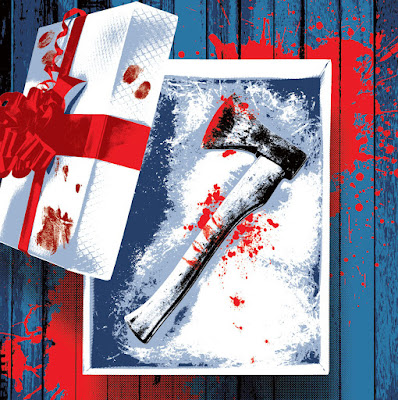