How? How do we now have four of these bloody things? Especially when they keep getting worse. Well, that's not strictly true. The series seems to have bottomed out with the third instalment, making anything else released both as awful and slapdash as anyone still watching deserves. Which includes me, masochist that I am.

After his small part in the previous movie, Simon Lipkin gets to move front and centre here. He is the new Mr. Poppy, Jerry, cousin of the old Mr. Poppy (yes, Marc Wootton finally decided to move on from the series). Turning up at a school, Jerry is allowed to just immediately get himself involved with the Christmas musical that is being planned, a rock opera. Because schools are absolutely able to do that, as has been shown in every previous Nativity! movie. The rock opera needs to be done right, and there are a couple of main sub-plots, one involving a small boy who has parents too busy to take much notice of him, and one involving a child refugee separated from his father.

Okay, I will begrudgingly admit that, despite my harsh words opening this review, this fourth Nativity! movie feels ever so slightly better than the third one. If there was someone better in the lead role, it could have been an actual decent movie. But we get Lipkin in the lead role, a man who decides to perform his role as a cross between Wootton and Jack Black, with the skill of neither.

Writer-director Debbie Isitt seems to have made this her main focus over the past few years (I noticed there is a stage show version now, and I am assuming she will have at least some credit for that). None of these films have been very well-received, critically, but I know that the first two did great business. I can even see the appeal in the first one. And the second, which tries to repeat the main trick while adding in some David Tennant. But I am surprised that enough people saw, and enjoyed, the third to warrant a fourth. Will there be a fifth? Knowing my luck, probably.

I've already complained enough about Lipkin, spending any more time criticising him would feel too much like tripping up a small puppy, but there's a decent supporting cast here to at least partially make up for his central awfulness. Craig Revel Horwood may not be one of the better players, but he has a bit of fun with his role, giving us the main villain this time around. Daniel Boys, Helen George, and Celia Imrie all do well as the main adults caring for the children, Hugh Dennis and Anna Chancellor are good as the parents not paying their child much attention, and Ruth Jones brightens up the second half of the movie with her presence. Brian Bartle (Doru, the refugee) and Rupert Turnbull (Barnaby, the child with "absent" parents) aren't the best in their roles, but they don't do a terrible job, and I've sat through much worse child performances. You also get small roles for Meera Syal and Jessica Hynes, with the latter bursting in near the end with just the right amount of energy and humour to perk things up.

Not the worst, but that's a very low bar set by the previous movie, Nativity Rocks! feels like a return trip to a well that dried out some years ago. I really hope that they don't make another one. But I know I'll end up watching it IF it happens.

You can buy a set here. 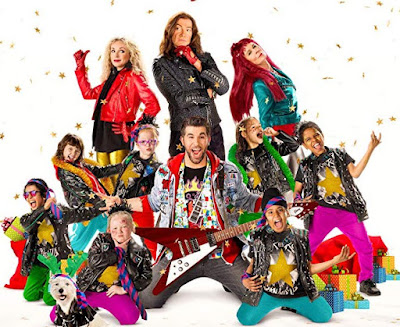