With Disney currently positioning themselves to be our mouse-ear-wearing rulers, and owners of everything that we have emotionally connected to on the silver screen, I felt it was time to dive into one of their many festive selections. Unfortunately, I opted for Mickey's Twice Upon A Christmas. Disappointing, especially when you think of how enjoyable Mickey's Once Upon A Christmas was, this is something to point to immediately when people ask why you may prefer traditional animation techniques over computerised imagery.

The main story ideas, as the film is basically an anthology of Disney Christmas tales, aren't that bad. It's a simple case of the animation style being so ugly that it is enough to keep you from purely enjoying any part of the film.

First up we get a tale of Minnie Mouse and Daisy Duck becoming more and more heated in their rivalry at a local ice-skating competition. Then we have a tale showing how Huey, Louie, and Dewey hatch a desperate scheme to get their names on Santa's good list. Third, we have Goofy being his usual embarrassing dad self, this time while his son, Max, brings home a girlfriend for Christmas. Donald Duck is driven mad by the crowds and Christmas carols in the fourth tale. Last, but not least, we get Pluto accidentally ruining Mickey's Christmas plans, which leads to him running away from home and becoming friends with Santa's reindeer.

All of these tales work well with the main characters, and many of them have some nods to other things you have loved from Disney (there are more than a couple of references to Fantasia, for example, and any excuse to get Scrooge McDuck making an appearance is alright by me). The tone and humour are pitched perfectly at the main audience, and every Christmas morning is shown to be that picture-perfect Christmas morning we enjoy seeing in movies (huge tree, snow all around, nice decorations everywhere, carol singers, gifts sitting there for loved ones, etc, etc).

The voice cast are also all as well as you'd expect. Wayne Allwine, Tony Anselmo, and Bill Farmer have been voicing Mickey, Donald, and Goofy, respectively, for many years, and they're excellent. Tress MacNeille and Russi Taylor likewise, the former as Daisy Duck, while the latter does both Minnie Mouse and the troublesome trio of Huey, Louie, and Dewey. And there are small roles for Edie McClurg, Chuck McCann, and Alan Young (who voices Scrooge McDuck).

You wouldn't even notice that three directors and at least a dozen writers were involved here. Everything feels fairly consistent throughout each sketch, culminating in a sequence that has everyone coming together, of course, for some Christmas cheer by a warm fire.

No, the only major sticking point here is the animation. But, DAMN, it's enough to spoil the whole experience. It's not just that it looks cheap and cold, although it really does, but it's also the fact that some of these characters just don't look right when computers smooth off the edges and try to make things sharper, and those characters are usually ducks.

It's not terrible, aside from the horrible animation, but if you have to choose between this and Mickey's Once Upon A Christmas then always go for the latter.

This is the best way to buy it.
Americans can pick it up here. 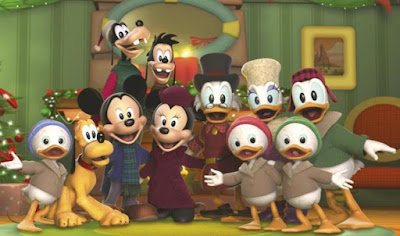