Both director Marita Grabiak and writer Barbara Kymlicka have a fair amount of experience in the world of TV, and Christmas In The City is exactly the sort of competent TV movie you would expect from people who know what they're doing in the field. It has one major negative, which I will get to soon enough.

Ashley Williams is Wendy Carroll, a young woman who is struggling to keep the bankers from claiming the candy store she now runs, a store that used to belong to her deceased father. Heading to the city for the holidays, with her daughter (Grace) by her side, Wendy wants to get herself a holiday job that will help to pay off some debt and save the store. Thanks to her good friend (Angie, played by Shanola Hampton), and the miracle of convenient plotting, Wendy ends up working in a department store, and getting along famously with the boss (Tom Wolman, played by Jon Prescott). Unfortunately, the store is being given a makeover by Teanna Musk (Ashanti), a woman who has little time for any traditional Christmas trimmings that get in the way of converting sales.

Working through the usual selection of boxes to be checked for this kind of fare, Christmas In The City is as unbelievable as it is enjoyable. This sits in that sweet spot of being good enough to enjoy while it is on, yet not good enough to completely distract you if you have it on the TV while you're doing important Christmas prep. The plot is ridiculously simple, I probably said a lot more in the previous paragraph than I needed to, and the ending is obvious from the very opening minute of the film, but it goes down well with your mince pies and hot chocolate.

A large part of the appeal comes from the adult cast members. Williams is someone I have always enjoyed onscreen, and she's just as sweet and likeable here as ever. Hampton does just fine in the role of the bestie, and Prescott is the usual handsome guy with plenty of money at his disposal who takes most pleasure from the kind of seasonal traditions that money can't buy. Then you get Ashanti, who has a lot of fun being the over the top villain of the piece, striding in to the toy department, flanked by her beefy assistants, firing people, setting up new advertising displays, and, of course, even firing Santa.

So what is the one major negative? I hate to say it, but it's Kylie Noelle Price (credited here as just Kylie Price), the little girl who plays Grace. She is, despite stiff competition in this field, the most annoying and awful child actor I have yet seen in one of these festive TV "treats". Seriously, I would have enjoyed this film a lot more if the child had been put out of the picture somehow, perhaps used as a plot device to bring everyone together again in time for the grand finale. That didn't happen, and every moment that Price acts onscreen is a moment that made me want to rip out my own shinbones and drive them through my skull.

An above average slice of sweetness, dragged down to just average by that one performance, Christmas In The City should please people who know exactly what they're looking for from these movies.

Here are some different movies you can buy. 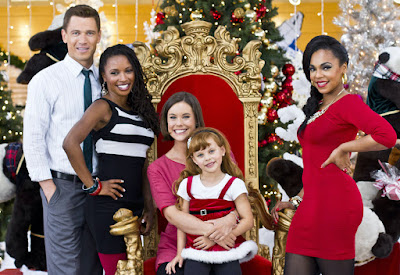