The directorial debut of Sergio Pablos and Carlos Martínez López, Klaus is an animated Christmas tale that reimagines the source of many traditions, and does it with a perfect mix of good humour and gorgeous visuals.

Jason Schwartzman is the voice of Jesper, a young man who consistently outdoes himself in his efforts to coast along while he waits for his father to stop trying to make him into a useful member of society. This backfires when he is sent to the small town of Smeerensburg, tasked by his father to have 6,000 letters posted in a year. Smeerensburg has feuding families, a schoolteacher (Rashida Jones) with no pupils, and one citizen who lives out in the woods and spends his time making lots of toys by hand. That citizen is Klaus (J. K. Simmons), and he may well be the key to getting Jesper his quota of letters. He may also be the key to big changes throughout the town.

There's nothing new here, and few people will go into it expecting that, but the screenplay, written by Zach Lewis, Jim Mahoney, and Pablos (based on his story idea), is a good take on the traditional festive tales about a selfish character finding his world enriched when he starts to help others. As Jesper starts to make progress in his personal mission, he unwittingly starts off the legend of Santa Claus and spreads more and more good cheer throughout the village, with children suddenly keen to learn how to read and write, if only to ensure they can send off a letter and hope to receive a toy in return. The only main criticism of the script worth mentioning is the placement of the ongoing feud. It's obviously there for the purposes of the plot, but it would have been nice to have some origin story for it, something that could have maybe tied in better with the central plot thread.

Schwartzman is great for the lead role, giving a vocal performance not entirely dissimilar to the kind David Spade delivered in The Emperor's New Groove. Simmons may not be the first person you would think of to voice someone who is essentially Santa, but he smooths some of the roughness off his voice and fits the character perfectly. Jones is very good as the teacher who finds herself with a sudden influx of pupils, Joan Cusack and Will Sasso are good fun as the respective "leaders' of the feuding factions, and Norm MacDonald lends his voice to the character of a ferryman who is unsurprisingly prone to saying things in a tone very much in the way of Norm MacDonald.

Produced by Sergio Pablos Animation Studios, I'll say once more that the visuals here are gorgeous. Stylised, and beautifully sharp and crisp, the look of the thing sets it apart from many other animated films without making it suffer by comparison. It's a film that feels made up more of straight lines and edges than softened curves, yet the end result is no less sweet and endearing.

Although it may not have fictional royal family members, Vanessa Hudgens, or even Kurt Russell playing a Santa who channels Elvis, Klaus is perhaps the best festive treat that Netflix have delivered yet. I look forward to whatever Pablos delivers next. 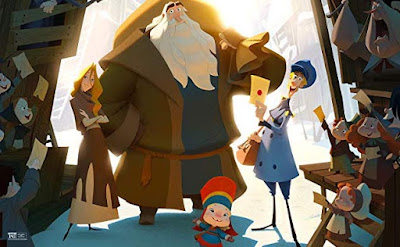