Obviously, first of all, watching The Nutcracker In 3D in 2D feels like it's diminishing the experience slightly. Never fear, however, because this film being in 3D is the least of the "selling points". Oh, it has such sights to show you. I almost didn't include it in my roster of festive film reviews, but the recent thoughts of people losing their minds over Cats reminded me that other people deserved to hear about it.

Essentially a telling of the classic tale, with Elle Fanning in the role of Mary, the main young girl who finds herself going on an adventure with a nutcracker who comes to life, this is a wild fever-dream interpretation of the material, with additions that just genuinely boggle the mind. Don't believe me? You will, by the time you have sat through a musical number which allows Albert Einstein (played by Nathan Lane) to sing a song about relativity to a famous melody from the suite. Yes, that happens. And it's one of the most memorable moments.

Director Andrey Konchalonskiy (AKA Andrei Konchalovsky) also co-wrote the screenplay with Chris Solimine. Konchalovskiy, director of such '80s hits as Runaway Train and Tango & Cash, THAT Konchalovskiy. He has mixed things up over the years, and I'm not saying that making those action movies means he should give us nothing but more films in the same vein, but this seems like a wild departure, even when considered alongside his more varied films from the past couple of decades. It's so unrelentingly bizarre, in relation to the main choices made, that it becomes something you need to see, just to give yourself a badge of honour. I haven't even mentioned the talking monkey, or any of the other supporting characters who help to make up the bizarre menagerie populating this cinematic world.

There's also a good cast in place for the main roles. Fanning is good as Mary, Aaron Michael Drozin does just fine as her brother, Max, and Lane is at least fun in the role of "Uncle Albert". Richard E. Grant is the father, Shirley Henderson is the voice of The Nutcracker, and John Turturro and Frances de la Tour provide nightmare fuel with their portrayals of, respectively, The Rat King and The Rat Queen. Turturro takes the first prize for terrifying children, especially in the one or two moments that have him snarling in a way that turns his face more ratty while his civil facade slips a la Bilbo Baggins in The Lord Of The Rings: The Fellowship Of The Ring.

Despite the oddness of it all, The Nutcracker In 3D (in 2D) somehow manages to stay fairly uninteresting throughout most of the runtime. The direction from Konchalonskiy is on par with that of an ambitious festive special for the BBC (to be fair, they probably could do something much more impressive than this nowadays). Perhaps the problems lie with the tale itself, which is better suited to a theatrical performance than any attempted narrative film, but that doesn't let anyone off the hook when they come together to have a stab at it.

You CAN buy it here. But don't. 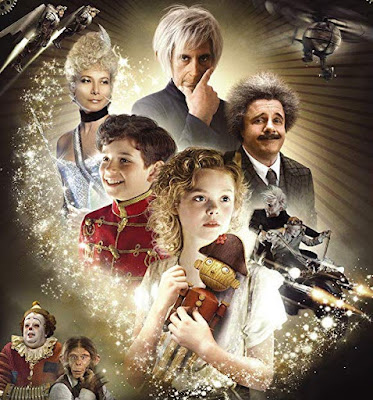