A British Christmas TV movie forgotten by most (including myself, it was put back on my radar by someone mentioning it as one they still enjoyed), Bernard And The Genie is strange and silly, ever-so-British, and not without pleasures for anyone who likes the central cast.

Alan Cumming plays Bernard Bottle, a man tasked with buying fine art for his employer (Charles Pinkworth), who then tries to sell it for huge profits. Well, that WAS his job. He gets fired at the very beginning of this tale, and his boss really wants to make his life miserable. It couldn't get much worse, as Bernard soon finds out that his girlfriend, Judy (Andrée Bernard) is sleeping with his best mate, Kevin (Kevin Allen). On the plus side, he finds himself with a genie (Josephus, played by Lenny Henry) and a way to make anything he wishes come true. Not just three wishes, oh no, but as many wishes as he wants.

Directed by Paul Weiland, and written by Richard Curtis, Bernard And The Genie never attempts to be anything other than what it is, an amusing little British TV movie to help fill the schedules during the Christmas season. Despite being a 1991 production, it's quaint and dated enough already to feel very much like something put out in the 1980s. In fact, I was surprised to see what Curtis had written before this, because his script here feels very much like the kind of juvenile and fantastical comedy you could make when reworking a classic tale for some school project (and as I once did this very thing with A Christmas Carol, I am speaking from experience).

The wishes are all easily realised with some editing and a variety of props (or cameo stars, in the shape of UK celebs such as Melvyn Bragg, Bob Geldof, and Gary Lineker), and everything is quite predictable, but the fun here is just watching people work in something that is designed to serve as pure family entertainment. A world onscreen that we all know, with an added sprinkling of magic over it to sweeten some of the gloomier moments.

Henry is a lot of fun as the genie, as expected, and Cumming is enjoyably naive and optimistic in the role of Bernard, a man who seems destined to be kept down in life because of his good nature. And, here ye this well, Atkinson is a scene-stealer as the nasty boss, always using the word ye whenever possible, and being SO outrageously harsh to Bernard, in a way that borders on the absolutely deranged and obsessive, that it's both horrendous and hilarious at the same time. The other person worth mentioning is Angela Clarke (billed as Angie Clarke), portraying a young woman who is introduced to Bernard by Josephus, and who seems to not mind the oddness of the awkward pair.

With the quality, and quantity, of seasonal fare having increased dramatically over the past few years, there's no real reason to ever put this high on your list of prospective viewings. It's perfectly fine though, for what it is, and those who enjoyed it when they first saw it will probably always have a soft spot for it.

There doesn't seem to be any decent release of this out there, but it's easy enough to view 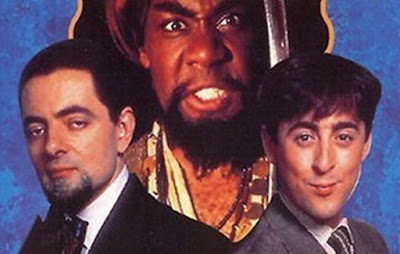