The House At The End Of Time is a number of things. It's an interesting little puzzle. It's an emotional drama. And it is, despite what some may think, a horror movie. It may not conform to all of the expected genre conventions, but it deals with some painful loss and repercussions that ultimately add up to what many would consider to be a truly horrifying scenario.

Things begin in 1981. Dulce (Ruddy Rodríguez) is confused as she and her family are attacked by supernatural forces. Her  husband (Juan, played by Gonzalo Cubero) dies from a knife wound, and she watched her son pulled back through a doorway, where he then disappears. It all seems quite clear to the authorities. Dulce did it. Her prints are on the murder weapon. It's the only thing that makes sense. Thirty years later, Dulce is released, but she remains under house arrest. While staying at home, she starts to piece together a puzzle that may explain past events. But can anything be changed?

Written and directed by Alejandro Hidalgo, making his feature debut in the director's chair (with his only previous credit being a screenplay for a film I haven't seen, and hadn't previously heard of, Azotes De Barrio), this is the work of a film-maker who is confident both in his own capabilities and in the patience of an audience. It's not exactly unpredictable, or even all that unique, but it's all laid out in a way that shows how much care has been taken to make a worthwhile tale concerned about more than just any jumps and cheap scares.

Rodríguez is very good in her role, whether playing her character in the past or the present. She carries the air of someone who has experienced great loss, which in turn allows viewers to remember that something happened in those opening scenes of tragedy that defies explanation. Cubero has a smaller role, and his character is not someone you really like spending time with, but he does well. And both Rosmel Bustamante and Héctor Mercado do good work, playing the children of Dulce, the cause of both her joy and grief.

The big problem that the movie has, and it's a problem that has affected bigger movies than this one, is the fact that it reveals details long after most viewers will have figured everything out for themselves. That doesn't make those details and less appreciated, it just undermines what could have been a big strength of the film. There's no real sense of mystery, and anyone with even a passing interest in this kind of genre fare will have a good idea of where everything is heading from the opening act.

Hidalgo shows a lot of promise, and I'll be very interested to see what he does next, but I hope next time he can throw in a few more surprises, and maybe some more scenes that provide some classic horror moments. 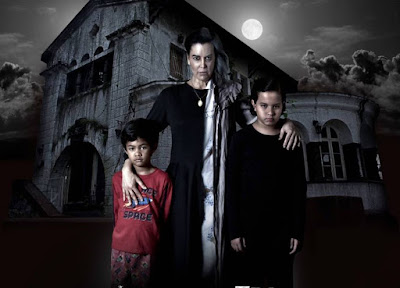