Mimi Rogers plays Melody Parris in this wonderful little festive TV movie that mixes in all of the expected story beats with something just different enough to make it all feel a bit less tired than other examples I could point to.

Melody has a decidedly average life. She is passed over for promotion at her work (she sells fragrances in a department store, and has a gift for being able to pick someone the perfect scent once they have answered some simple questions), her boyfriend won't make any major commitment, and she knows that her Christmas will be another time during which she settles for less than she really wants, partly due to the fact that her mother never really goes all out with the Christmas dinner traditions. But things start to change for Melody when she helps out a young boy (Danny, played by Bill Switzer). It's the season for those who have been on the nice list to be rewarded, which may explain the change in Melody's fortunes.

Directed by Charles Jarrott, a sure hand who had a lengthy filmography spanning work for cinema and TV over six decades, The Christmas List feels more like a fun film that is making use of the trappings of Christmas, as opposed to a Christmas movie with a plot shoehorned in there. This may not seem like a big difference, and I cannot speak to how writer Marie Weiss (who gave us both this and The Ref) worked out the storyline, but it's enough to make it stand out from a (over-)crowded field. There are still limitations in place, and no surprises, but there are plenty of moments that prove to be far more rewarding than, for example, the standard scene we have seen so many times featuring the leading lady saving a festive event at the last minute with her sheer love of Christmas. I may be exaggerating, but you know I am close enough to the truth.

Rogers is also giving a performance that doesn't feel like it's constrained by the usual TV movie boundaries. That's not a polite way of saying that everyone else who acts in these specific types of TV movies is doing a bad job. It's just refreshing to see someone not having to act as ignorant of the magic starting to happen around them, which is what happens most of the time. Melody starts to notice the strangeness early on, and it is up to her to try to turn things in her favour or let the opportunity pass her by, which allows Rogers to play her character very naturally, with a building sense of optimism as more things begin to fall into place for her. Switzer is also very good in his role, managing to be the kind of kid who befriends a random adult without being too annoying, and Rob Stewart works hard to make his character more appealing after making an unflattering first impression.

There are also good turns from Stella Stevens (Melody's mother), Enuka Okuma (Naomi, a colleague and friend), and Madison Graie as April May, the woman who gets a promotion ahead of Melody, despite having nowhere near her knack for actually selling the customers the right product.

Despite my praise, however, and despite the fact that I have mentioned the ways in which this doesn't feel like a Christmas TV movie, there are a number of ways in which it decidedly DOES feel like one. That's no bad thing. It is what it is supposed to be, after all. It just means that it falls short when compared to most movies that are not created to that remit. You'll still know most of the story beats, you can see the ending coming a mile away, and an oft-repeated magical "vision" of people wearing Santa hats when Melody realises she is being blessed with good fortune again is a bit too cheesy for it's own good.

One worth tracking down though, and I would happily watch it again.

Here is a DIFFERENT movie with the same title. Might be fun.
That different movie is also available here, but with the same region coding. 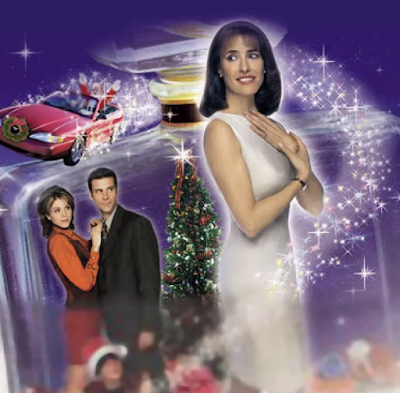