Netflix And Chill: The Knight Before Christmas (2019)

Netflix continue to try making their mark on the traditional Christmas movie market and, once again, there are a mix of pros and cons with their approach.

Vanessa Hudgens (who did such a great job in The Princess Switch last year) is a young woman, Brooke, who has everything in life, except for a man. And every woman needs a man, of course. Although... well, we will come back to this point soon. Anywayyy, that looks set to change when a Knight (Sir Cole, played by Josh Whitehouse) is sent forward in time by an old crone (Ella Kenion), enabling him to complete whatever quest he is supposed to figure out needs his attention, and enabling Brooke to realise that she doesn't mind the idea of true love.

Like almost every other Christmas movie they have produced over the past few years, with one or two notable exceptions, this one works in terms of the simple entertainment it aims to provide, yet feels as if those who made it were too wary to fully embrace the conventions of these specific types of movies. You get moments you expect, but you get them in a diluted, "diet soda", form. The sweetness and sense of immediate satisfaction are both there, they're just lacking the unabashed pure sugar rush.

Hudgens is good enough in the lead role, but it doesn't make the use of her talent that The Princess Switch did. That would seem to be the fault of writer Cara J. Russell, who has a fairly short list of credits, compared to the kind usually amassed by people in this field (although everyone starts somewhere), and perhaps that explains her approach to the material lacking a confidence in just how much viewers will welcome this kind of thing leaning hard into the expected "bucket list items". Director Monika Mitchell has a bit more experience, with both standard TV movies and Christmas TV movies, but doesn't show it here, which adds to the feeling that both she and Russell were slightly hampered by Netflix, who somehow seem to think that they can't just dive right to the ground and make snow angels while we look on and smile.

Although Hudgens is fine, Whitehouse can be given a little praise for his fun, light performance. Sir Cole may be ridiculously unfazed by things around him in the modern world (cars, TV, phones, Alexa, etc), but Whitehouse plays up the wide-eyed innocence of his character well enough. Emmanuelle Chriqui is the other main lead, friend to Hudgens and parent to the main child involved in the storyline (Claire, played competently enough by Isabelle Franca), and does well enough in her role.

It's telling that you can get all the way to the grand finale here without really knowing what the main lesson to be learned is, or even what quest Sir Cole needs to complete to make things right. Netflix want to hand you gifts, but they're not sure if you'll like them. So they make stuff, move towards embracing the home-made charm of it all, and then chicken out by polishing it up too much and packaging it with a gift voucher. You may read this and wonder what the hell I am on about, but if you're a fan of Christmas movies then you know I am right. Come on, Netflix, just knock back the eggnog, have the snowball fight, add more montages, wear the ugly sweater with pride, and stop pretending to be above it all. 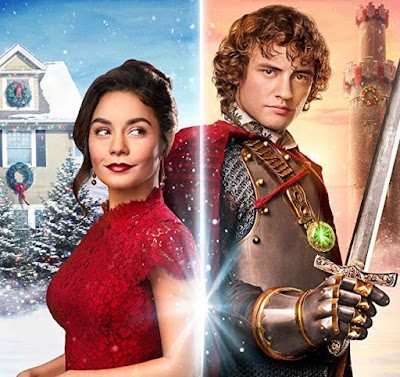