Yule Love It: Surviving Christmas With The Relatives AKA Christmas Survival (2018)

Having years ago written the screenplay that would traumatise a generation of married men considering hooking up with a random woman (Fatal Attraction), James Dearden has now decided to write, and also direct, a film all about something with the potential to be equally difficult for many married couples: the family Christmas dinner.

Julian Ovenden and Gemma Whelan are Dan and Miranda, the married couple who have been tasked with delivering a traditional Christmas for visiting relatives. Money is tight, the house is having a lot of work done to it, there's a brand new oven due, and extra strain comes from Miranda's sister, Lyla (Joely Richardson), and her partner, Trent (Michael Landes). The kids have their squabbles, Dan has to try and figure out a way to help his ex-partner with their weed-addicted son, Harry (Jonas Moore), and Aunt Vicky (Ronni Ancona) seems one step away from fooling around with Trent, who seems to be keeping one eye on wherever his next drink may be and one eye on a chance to get frisky.

Pulled from some of Dearden's own experiences, and certainly full of moments that will be recognisable to anyone who has been put in charge of the big family dinner at Christmas time, Surviving Christmas With The Relatives has elements contained within it that work, but that is rarely down to the script or direction, both of which feel fairly perfunctory. It's odd to think that Dearden could somehow think of this being a worthwhile addition to the overstuffed selection of Christmas movies we get every year. I'd go as far as saying that many of the "lesser" TV movies churned out for this time of year have been a bit better than this. At least they stay focused on their simplistic aims, weaving together basic plot elements in a way that seems planned out (most of the time). This, on the other hand, feels like the work of someone who had too many ideas without realising that none of them worked well with the others being forced into screenplay form.

The cast are largely responsible for the moments that do work, so it's a shame that Dearden didn't cast his male characters as well as he cast his females. Whelan is incredibly likable , Richardson is incredibly frosty and entitled, and Ancona is the perfect mix of neuroticism, regret, cheer, and good-heartedness. Landes is actually also very good in his role, although he is helped by the fact that he's the one American adult in a family unit made up of bickering Brits. Ovenden doesn't ever get you fully on his side, nor does Moore, but it is difficult to say how much of that stems from them and how much from the script.

If you could at least get a sense that there was something, however incomplete, that Dearden was trying to comment on with his comedy drama then that would be some consolation. There isn't though. It's just a snapshot of moments: Eastern European workmen who aren't always appreciated for what they do, a vicar and his wife showing their own strained relationship, an elderly aunt who has a vibrator packed in her luggage, a pretty female visitor from another country who may end up making quite an impression on a stoned teenager. Hell, if this was an '80s John Hughes movie then it could have ended up as one of my favourites. But it isn't, and it won't. I don't see it ending up as a favourite for anyone.

You can buy it here. 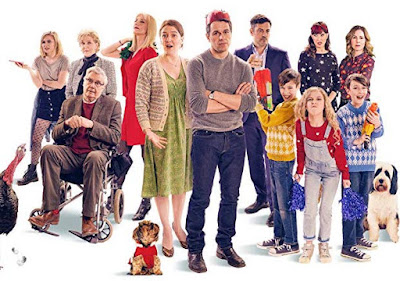