Lacey Chabert is as much a part of my Christmas preparations nowadays as multiple half-used rolls of wrapping paper and a building sense of frustration every time I lose the end of the sellotape (no, I don't have a tape dispenser, we're not all living in some kind of organised state of bliss). Mariah Carey is also now very much part of the Christmas celebrations. And that goes double ever since I heard a large group of drunken men leave the Christmas Market in Hyde Park while they sang "All I Want For Christmas Is You" at the top of their lungs. So when I found a Christmas TV movie starring both Chabert and Carey I knew that I had to see it. And then I found out that Mariah Carey also directed the thing. Well . . . cover me in brandy and call me pudding.

The story is fairly simple, as these things so often are. Chabert plays Kristin Parson, a young woman who can design and make clothes, and who we first see sadly closing the doors of her little boutique clothing store for the last time. She has to head home again, with her daughter Emily (Fina Strazza) by her side. Emily has to adjust to a new life, and new school, while Kristin figures out what to do next. There's a lovely Aunt (Kathy Najimy), a music teacher who used to be a school friend (Danny, played by Brennan Elliott), and a woman who does her utmost to keep everyone in their place, as long as that place is just below her own social standing (Melissa, played by Carey). Oh, and there's a janitor named Thomas (Kevin Chamberlin) who seems to have a bit of magic about him, especially after we saw the same actor playing a homeless man given some money by Kristin.

This is a slightly odd Christmas movie, in that most of the things we know and love about them are present and correct, yet it lacks a certain something. Perhaps director Carey hoped to use the format to do something a bit different, or perhaps writer Jennifer Notas Shapiro (who did a good job with both The 12 Gifts Of Christmas and The Flight Before Christmas) lost focus while working on this one.

It's hard to pin-point exactly why it doesn't work, but a few contributing factors are: Chabert playing someone who is even more bland and passive than usual, Carey wanting to play a "mean girl" without ever leaning far enough into it, and a carelessness with the material that makes it all feel a bit more stilted than usual, especially during the product placement moment that is even more egregious than most you will see in these movies.

Strazza does perfectly fine in her role, despite her struggle never feeling enough like something to really be invested in, while Chabert and Elliott work well together, all smiles as they bond together while remembering sweet high school memories. Carey is alright, but should have been meaner (as mentioned), Najimy is as fun as she so often is, and Chamberlin does very well as the sort of person who can give children odd messages with a twinkle in their eye in a way that these movies maintain is completely charming and innocent, instead of worrying and creepy.

The movie can be bought here. 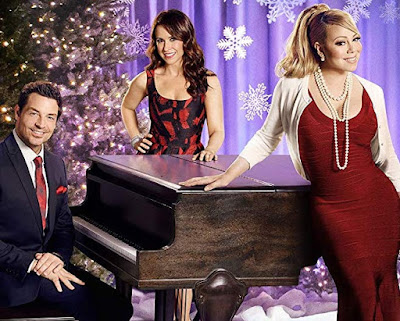