Someone mentioned Angela's Christmas to me last year, and praised it highly, but it was just something I didn't get to until now. Despite the runtime being only thirty minutes. Sometimes I do manage to plan my schedule far enough ahead that everything is in place, although you wouldn't think it from the rambling nonsense I type out most days.

Anyway. It's Ireland. It's the 1910s. Christmas time. And this story centres on a little girl named Angela, of course. Seeing the baby Jesus in the middle of the nativity scene in her church, Angela thinks he looks too cold, so she plans to kidnap him and give him somewhere warm to spend the night. This leads to a bit of trouble, as you might imagine, and it seems like just a matter of time until Angela is caught and punished.

Based on a true story, that was turned into a children's story by author Frank McCourt (who also wrote Angela's Ashes, which was made into a feature film years ago), there's no denying that Angela's Christmas is sweet and enjoyable. It also looks lovely throughout, thanks to the sterling work of Brown Bag Films. You can feel the chill in every scene, which makes it all the easier to feel the warmth from every candle and fire.

With Malachy McCourt, brother of Frank, narrating the tale, it feels very much like a nice, personal story being shared with us. The voice cast do well. Lucy O'Connell is very good in the main role, Ruth Negga lends her talents to the role of Mother, and an assortment of other players make up the small supporting cast. It's all about the innocence of a child doing wrong while trying to do something good, an act that ties in to a story told by her mother about the night she was born, and it's . . . nice.

Unfortunately, that's all it is. It's the kind of tale you hear from someone who is doting over their child, ultimately always more rewarding and warming for the teller of the tale than whoever happens to be within earshot to tell it to. I mean, look, every piece of art, be it a painting, a movie, writing, or whatever, should be for the pleasure of the artist, first and foremost. The fact that others can enjoy it doesn't mean they will. The fact that others can see meaning in it doesn't mean that they will see the same meaning. That's a given. It's just a shame that this doesn't quite do enough to allow everyone to connect more with it. Having said that, others will strongly disagree.

As already mentioned, the visuals here are lovely, the tale itself is sweet enough, and there's definitely enough here to satisfy those after a heartwarming Christmas short story. I just thought it was going to move me more than it did, which maybe says more about my cold, dying heart than it does about the quality of the final product on display here. Maybe.

There's the book available here.
Americans can get a DVD here. 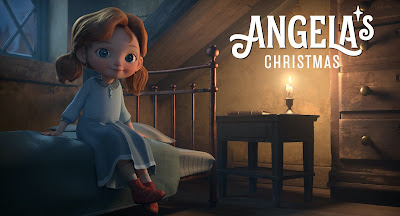