It's an odd thing to make a movie out of, right? George Michael songs? And using a cheesy Wham hit to inspire the whole thing? It's weird. But we're kind of living in peak weird. Okay, that's not true, I don't want to tempt fate here, but we certainly seem to be living in a time that rewards strange films that seem ripe for dismissal, yet build up an appreciative and loyal fanbase. I'd point towards the likes of the Mamma Mia! movies, The Greatest Showman, and Bohemian Rhapsody as prime examples. Although not all musicals, the music used is a vital part of their appeal.

Emilia Clarke plays Kate, a young woman who seems to spend her time being selfish and making one bad decision after another. That's when she's not spending her time being elfish, due to working in a Christmas store, run by a woman who goes by the name of Santa (Michelle Yeoh). Kate wants to fulfil her dream of being a great singer, and she cares more about her auditions than anything else, including her concerned mother (Emma Thompson). But she also finds herself caring for a handsome, quirky, stranger named Tom (Henry Golding). Tom might just be the person to help her start living her life again without flying off the rails, and it could all work out well just in time for Christmas.

Directed by Paul Feig, the big draw here is the script, co-written by Emma Thompson and Byrony Kimmings (based on the story by Thompson and her husband, Greg Wise). I've enjoyed all of Feig's movies over the past decade, don't get me wrong, but I forgot that he was the director here until I saw his name in the opening credits. That's because, for me, I developed blinkers when I heard of Thompson's involvement, and just immediately figured this would be more interesting for her involvement. And it is.

It's also lifted by the involvement of the other three leads. I couldn't be happier to finally see a movie role for Emilia Clarke which finally lets her be as likeable as she so often is offscreen. I may have missed some others, considering I've only seen her sci-fi blockbusters (so that is on me), but I had a fear that Clarke would languish for a while after Game Of Thrones finished, before finally fading into obscurity. That looks less likely now, and rightly so. Clarke is able to keep you on her side even as she moves from one mistake/bad decision to the next, and the third act rewards viewers for sticking with her, of course. Yeoh and Golding will continue to win over fans who enjoyed their performances in Crazy Rich Asians. Yeoh is a lot of fun as the tough, but soft-centred, boss, and Golding will put every guy in the shade with his positive attitude and romantic gestures. He may have to play things a bit too quirky at times (I saw someone mention, rightly, that he's the male version of the "manic pixie girl" rom-com trope) but he's also able to take a breath and take a moment with Clarke whenever things need to settle into something a bit more serious. Thompson gives herself an accent (the family moved to the UK from the former Yugoslavia when Kate was young), and also gives herself a couple of the best lines, while Lydia Leonard does well with the hard role of the sister who is fed up with her sibling being able to get away with whatever she likes. Boris Isakovic does just as well, playing Kate's father, saying enough with what he doesn't add to conversations that have people reminding others of what he gave up to settle his family in the UK.

Feig directs capably enough, having shown with both this and A Simple Favour that he's moved away slightly from presenting every film as a box-ticking "Paul Feig film". And, despite his vocal critics, he often seems to know what will please audiences. He has faith (no pun intended) in the material, which pays off for anyone wanting to snuggle up and watch something fairly cosy and predictable.

What Last Christmas gets right is all of the stuff that some will hate. The Christmassy cheer, the cheesy love story, the collection of characters that feel like they're all waiting for their own spin-off sit-com, the mix of jokes ranging from sweet to just rude enough to prompt a guffaw from your eternally-well-manicured Aunt Helen. But it's not without some wrong choices, in my opinion. There's an indirect, and direct, positioning of the movie just around the time of the Brexit referendum. Part of me understands what it adds to the texture of the story, part of me thinks the film could have done without it (or could have done something with it without making it SO focused on the actual referendum result itself). The other wrong choice . . . well, it's the use of George Michael songs. Fans of the singer will be delighted, and I know that is part of the crossover appeal here, but the soundtrack felt like every song choice was shoehorned in there, just to ensure that fans heard his voice every five minutes. I love the way the titular song is used, I just didn't think the rest worked that well, with one notable exception that had me hiding my watery eyes.

Last Christmas is good. It's solid seasonal fare, and a delightful rom-com. But if they had set it in the late '80s or early '90s, had Kate trying to make something successful out of a pipe dream, and perhaps ended at some big concert event, it could have been a bit better. You could have still had the moments of xenophobia, you would have had more reason to use all of the featured songs, and the ending could be very similar. But that is why I write movie reviews and not movies.

You will be able to buy the movie here. 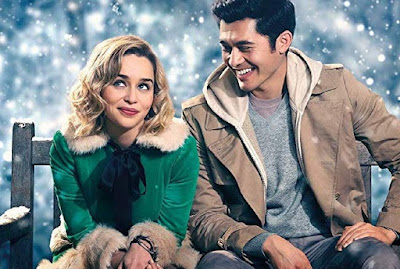