Writer-director Sam Ashurst seems to want to build a filmography full of impressive curio pieces that allow him to tell a story in a cost-effective way, birthing a lot of inventiveness from the various necessities. I have yet to watch Frankenstein's Creature (although I bought the DVD when it was available in a limited quantity), but I am aware that it's essentially a filmed monologue. And, in many ways, A Little More Flesh is very similar.

Stanley Durall is a (in)famous British director and he's revisiting his notorious debut, God's Lonely Woman, to provide a commentary for a disc that will house the film and some previously-unseen footage from behind the scenes. As Stanley discusses the movie, it soon becomes clear that things did not end well for either of his lead actresses (Isabella, played by Elf Lyons, and Candice, played by Hazel Townsend). What is initially just alluded to is soon clarified, with Stanley at pains to reassure listeners that nothing he did could have possibly harmed his leads. But is that at all true? Is Stanley really trying to reassure himself?

There's a very good idea at the heart of A Little More Flesh, and it's mixed in with one or two other good ideas. The commentary track allows Ashurst to develop a character, and a growing sense of foreboding, while he presents visuals that look convincingly in line with the era that the main film is supposed to be from.

Ashurst himself provides the voice of Durall, working from a carefully-constructed script that keeps the screws tightening as everything builds to an unforgettable final sequence. He does a good job with the tone and the choice of wording throughout, but it's a shame that he couldn't utilise an older actor who would convince more as someone who should be between 60-70 years old.

Lyons and Townsend are good fits for their roles, and there are decent turns from Dane Baptiste, playing an actor named Patrick, and Gabriel Thomson, as Leon. Although they're helped by the fact that their scenes are being spoken over by Durall, they feel authentic for the kind of acting being performed.

The central conceit here is basically sound, and it's a film built very much around a number of unnerving details, but Ashurst overdoes things slightly with intercut "interruptions" and that ending. As jaw-dropping and powerful as it is, it also feels like a step too far. It's a great moment, capping an intriguing film, but the two don't really feel as if they belong together.

Worth your time, and Ashurst is worth your support, A Little More Flesh ultimately proves more rewarding for the "non-horror" threads running through it. The exploration of art created by a bad man, the sharp contrast in attitudes between the 1970s and the present, as well as the reticence of some people to change with the times, and the ever-important issue of consent. 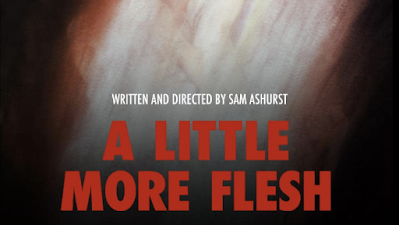