Let's be clear from the very beginning. Both you and I know that Drop Zone, a mid-90s action movie that throws Wesley Snipes in a plot involving some skydiving criminals, isn't a traditionally great movie. Even if you've not seen it before, you have an idea of the kind of entertainment it is aiming to deliver. The important thing is whether or not it actually delivers.

If you don't want to read my full thoughts, the general answer is yes.

Things start with a major incident on a plane, one that sees Pete Nessip (Snipes) lose his partner/brother, Terry (Malcolm-Jamal Warner). This means the whole thing is personal, of course, which also means that Snipes has his badge taken off him, because he's clearly a cop on the edge. His main lead is the fact that these criminals managed to pull of their crime in such an audacious manner, signifying that they must be skilled skydivers. Pete makes contact with Jessie Crossman (Yancy Butler), a skydiver who may know some of the people involved, and he ends up joining a talented crew on a number of high-altitude exercises.

Directed by John Badham, a man with a very entertaining, but also very inconsistent, filmography, Drop Zone is a typical slice of action nonsense from this time. There's some very good stunt work throughout, but the only problem is the recurring inability to perfectly blend in the main actors during the few moments in which audiences have to see them close-up while they "skydive". Everything filmed at more of a distance is much better though. Writers Peter Barsocchini and John Bishop don't care much for anything that isn't a cliché, which makes the script as eye-rolling as it is amusing. Subtlety and smarts are kept to a minimum, but it's easy to forgive when the cast and action beats help to carry it all along.

Snipes is, and always was, a solid action hero. This isn't his best action movie role, that will always be his turn in Demolition Man, but he always seems capable of handling himself, even when he has to get to grips with skydiving. Gary Busey is the head villain, and he's a fantastic presence, relishing the opportunity to play another character who shows no mercy as he executes his criminal plan, and you also get a fun supporting turn from Michael Jeter. Butler is a bit of a weak link, I've just never found her an appealing presence (from the little I have seen of her work, which would be this movie and Hard Target), but it's another role hitting a number of expected beats. Kyle Secor is a highlight, playing a skydiver named Swoop, and everyone else does decidedly okay.

It doesn't really do enough to stand out from the crowd, but Drop Zone is the kind of film that you want to watch BECAUSE it's so similar to many other films from this time. It's unremarkable, yet that's part of the appeal when you're in the right mood. 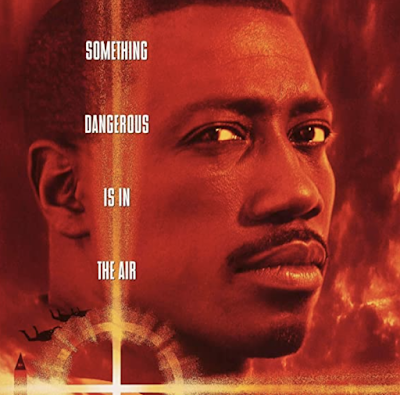