Brea Grant plays May, a woman who has a few problems in her life. Things are a bit rocky with her husband, Ted (Dhruv Uday Singh). Her book sales have dwindled, which means that career path may be coming to an end. And every night a man comes into her home and tries to kill her. She can wound, or even seem to kill, the man, but the body disappears a moment later. The police don't seem able to help, and they offer advice that doesn't take into account the strangeness of her situation.

Directed by Natasha Kermani, who is really hitting her stride now with this, her third feature, and the film preceding it (Imitation Girl), Lucky is a horror that extrapolates a very real, and constant, problem. The script, written by Grant, is enjoyably clever in the way it weaves so many familiar horror movie clichés with the kind of experiences that women go through every single day, whether that is having their concerns dismissed, having friends offer extra criticism when simple support is needed, or any number of other problems that seem to only really affect the female half of the population.

It may seem like the wrong time for Lucky to have been released, those who like to keep their heads in the sand may think that people are now facing consequences for behaviours that were once just accepted as standard, but it's actually a perfect extra reminder of everything that needs to be worked on. Mansplaining, gaslighting, domestic abuse, victim-blaming, expecting women to change their behaviour because of the actions of men, all of these things are covered in Lucky. There's also a great moment in which May is worn out and worn down, and snaps at someone who calls the result of her hard work a stroke of good luck. Although that particular issue isn't one just experienced by women, they tend to have their hard work shrugged off more often than men.

It's not the best performance I have seen recently from Grant, but she does good enough in the lead role. Singh does well alongside her, playing his character in a fairly neutral way that allows for most of his dialogue to be reconsidered as the main point of the film becomes clearer with each passing scene. Hunter C. Smith is "The Man", doing a good bit of stalk 'n' slash work, and there are good turns from Yasmine Al-Bustami, Leith M. Burke, and Larry Cedar, with the latter a standout as a cop who seems to be acting in the best interests of May without actually offering any real help.

The one weak performer isn't actually onscreen, it's Jeremy Zuckerman, responsible for a surprisingly poor soundtrack throughout. Zuckerman may be trying to riff on one or two well-known slasher movie themes, or maybe he isn't, but the end result ends up detracting from the visuals on one or two occasions.

Perhaps not sitting as comfortably within the boundaries of the horror genre that some fans want their movies to stay in, and with a central message that is about as subtle as a brick to the face, Lucky is an impressive and smart film. Subtlety be damned, especially when the message STILL isn't getting through to those who need to hear it, and Grant and Kermani lead viewers to a rewarding, if ambiguous, finale. 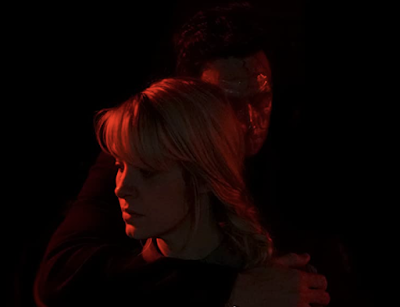