Jack is a talented chimpanzee. He can use sign-language. He can also skate. Both of these things come in handy when circumstances conspire to leave him in a small town that has a) a struggling ice hockey team, and b) a young, deaf, girl who could do with some support at her school. It's not long until Jack is becoming a favourite on and off the ice.

Director Robert Vince has a LOT of these kinds of animal movies in his filmography. Having also written the script with Anne Vince (wife? sister? cousin? I'm going to go ahead and assume it's one of those connections), he seems to have a very firm idea of what he wants to give viewers.

And what he wants to give viewers is a small-scale drama that features some ridiculous plot development as everyone onscreen just accepts their new simian star. It also features Kevin Zegers as Steven Westover, Jamie Renée Smith as his sister, Tara (the aforementioned deaf girl), and Rick Ducommun as the coach of the ice hockey team.

If that's something that you fancy then good for you. The opening scenes here don't bode well, with a couple of actors mugging in ways you normally only see in TV shows aimed at toddlers, but things do pick up once Jack starts to find his way around a new town. A sighting here and there, a stolen banana, and then it's time for his big reveal. And his ability to communicate with Tara via sign-language is a genuinely nice, and sweet, touch.

Three different chimps are credited for the role of Jack, they're all talented and better onscreen than some actors I have seen over the years. Thankfully, both Zegers and Smith are also very good, interacting with the chimp in a way that is much more tolerable than the way the adults were portrayed in the earliest scenes. And Ducommun does a good job as the coach. It's a shame that he's held back from giving a fully comedic turn, but he's certainly not exactly in line with all of the other adult performances, in a good way. There's also a main villain, of course, a doctor played by Oliver Muirhead, and he's exactly as you expect him to be, pacing around with purpose and barking statements about getting his hands on that monkey.

It's an oddity, a novelty piece, a children's film aimed firmly at younger viewers. Although released in 2000, MVP: Most Valuable Primate already feels like a relic from a bygone era. Putting chimpanzees in outfits and having them do things that humans normally do used to be a more commonplace thing (here in the UK we had chimps selling us PG Tips teabags for many years), but it's not any more. Yet it's still endearing and amusing enough to entertain children who want a film featuring a cute little chimp. Others should probably give it a miss. 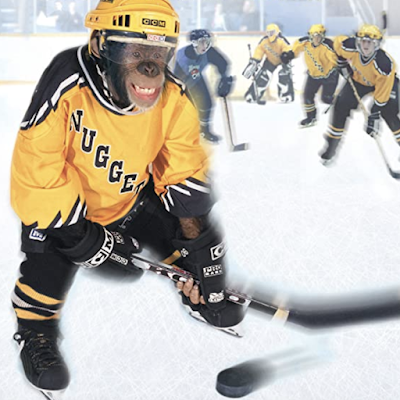