I cannot think about a horror film that I have cared less for recently than Temple. Sometimes you write a review with a mix of positives and negatives, even if you have to work harder to find some of those things, and sometimes you write a review in which you offer constructive criticism. And sometimes you just want to scream profanities at anyone who even thinks about watching a movie you have just endured. Temple is very much in the latter category.

Kate (Natalia Warner) and James (Brandon Sklenar) and the couple who are travelling through Japan, hoping to see some sights that are off the beaten track. They're accompanied by Chris (Logan Huffman). Because two guys and a beautiful woman has always been the best way to guarantee a stress-free and harmonious holiday experience. I hope the sarcasm was obvious there. The three find out about a temple that is located deep in a jungle area. Warned away from it by many people, they obviously want to go there and spend the night. And they then meet an entirely expected set of problems. I'm not saying they get what they deserve, but . . . I wasn't exactly rooting for them to somehow save themselves.

Director Michael Barrett doesn’t do a good job here, failing to cover up the many weaknesses and gaps in the script from Simon Barrett (no relation, as far as I can tell). Having picked this for his directorial debut, after years of working as a cinematographer on a number of excellent projects, Michael Barrett perhaps put too much faith in his writer. That's understandable, considering the many enjoyable genre outings that Simon Barrett has penned. This film isn't one I suspect either Barrett will place highly on their CV, if at all.

The cast can't work any magic either. Warner is a stunningly attractive leading lady, and both Sklenar and Huffman are handsome enough to be vying for her affections, I guess, but everyone has to act dumb enough for the script to move them from A to B, and elsewhere. They rarely make any good decisions, and many of the supporting cast members are pulled in to act as if they're in very different movies, whether they're being much more restrained and grounded in reality or acting like the typical harbingers we find in every horror movie that has a place no sane person should visit.

I've already written more here than I had planned. My initial review was simply going to say "Temple is utter shit". I'm glad I didn't just settle on that one sentence, but I'm sad that this small attempt to warn people away from the thing seems to have been crafted with a bit more care than the film itself. 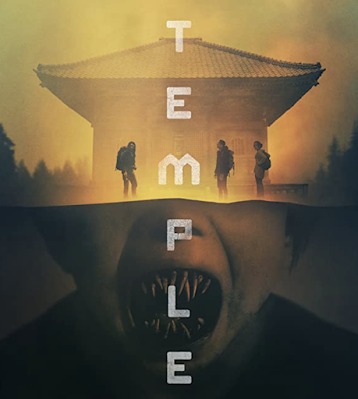