Written and directed by Brian Duffield, adapting a novel by Aaron Starmer, Spontaneous is the kind of good-natured film that should immediately make you a fan of those involved, both behind and in front of the camera. It's a great teen movie, easily sitting alongside the best of that sub-genre, and it just happens to involve a lot of spontaneous combustion.

Katherine Langford plays Mara, a cool schoolgirl who manages to stand out from the crowd without going into full quirky mode. She's good friends with Tess (Hayley Law), and the two of them seem to be happy wandering through their teen years. And then their classmates and peers start to explode. There doesn't seem to be any detectable cause, and no rhyme or reason to it. With the possibility of an early death now looking likely, Dylan (Charlie Plummer) decides to tell Mara that he has a crush on her, and has done for a while. They don't know how much time they have so they may as well enjoy some of it together.

Although he's been writing movies for almost a decade now, this is the directorial debut from Duffield, and it's a very confident one. He's helped himself immensely by casting it so well, but there's also a great balance throughout the script, blending the absurd humour of the situation with the deeper thoughts it prompts in the minds of the lead characters. It also includes some enjoyable movie references without resorting to having certain characters define themselves by dropping famous quotes in every other sentence (an error that so many other movies make when the writer wants to show how cine-literate they are).

Langford and Plummer pair up well, but it's Langford who carries more of the movie on her shoulders, being the individual in more scenes and discussing more of the unfolding situation with the voiceover provided to viewers. It's a star turn, and Langford is surely destined for even more great things in her future career path (if there's any justice). Law does well in her role, although she doesn't get to have as much fun as either Piper Perabo and Rob Huebel (playing Mara's parents). She also doesn't even get to have as much fun as Yvonne Orji, playing Agent Rosetti. I don't mean that Perabo, Huebel, and Orji are adding lots of laughs with their moments, but the way in which their characters are connected to Mara allows them to be involved in some interesting, sometimes supportive and sometimes confrontational, conversations.

Not a gore-filled splatter flick, the spontaneous combustions themselves are often allowed to happen just off-camera, with lots of blood then thrown all over people in close vicinity. Don't seek this out if you're after a horror comedy, but also don't seek it out if you prefer your films to be cosy and bloodless. It does what it needs to do in order to show how shocking the deaths are.

The more I think about Spontaneous, the more I like it. And the title is given a lot of poignancy once the first few scenes properly set out the premise. Next time you're wanting to make a spontaneous viewing choice you could do a LOT worse that this. 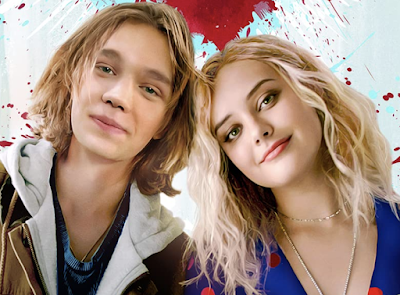