Yet another film that has been revisited and tinkered with by director Ridley Scott (who just cannot ever seem content with his films as originally released), Legend is a sumptuous fantasy flick that is almost non-stop style over substance.

Tim Curry is Darkness, determined to destroy daylight and turn the world into something dark and cold. He sends out some of his small denizens to set his plan into motion, which involves removing a horn from a unicorn and killing off those majestic creatures. A dark and cold world would be a more difficult one for Jack (Tom Cruise) and Lili (Mia Sara), especially as the former has professed his love for the latter. Do you know what a dampener it puts on new love to have Darkness turn your world into a landscape of night-time frost.

You can accuse Ridley Scott of many things, but you can never accuse him of skimping on things when it comes to creating a believable cinematic world. Love or hate the movies he has done over the years, they all take place in environments that feel 100% real. That also goes for Legend, a film with every scene looking ready for the viewer to step into. It's a shame that there's nothing else to it, beyond the visuals and the practical effects.

Writer William Hjortsberg, possibly familiar to horror fans as the writer of the novel that Angel Heart was adapted from ("Falling Angel"), has distilled things down to the most basic fairytale elements. Good, bad, magical creatures, and very little else of note. The dialogue is sparse, and what you do get isn't usually very good, unless uttered by Tim Curry. The plotting is slim, and the ending makes it all even slimmer.

Cruise and Sara do what they're asked to do, but it's just a case of them being in the right place onscreen, opposite some of the impressive creations. The best moment that Cruise gets is one in which he faces Meg Mucklebones (a green hag played by an unrecognisable Robert Picardo), but Sara gets to have a bit more fun in a sequence in which she is bewitched, and potentially turning evil. Billy Barty jumps around, David Bennent acts wide-eyed and mystical, and Annabelle Lanyon plays an oddly amorous fairy named Oona. The real star of the show is Curry, as unrecognisable under the make-up and prosthetics as many of the other performers. But there's always that voice, this time given a deeper timbre to convey the voice of Darkness. Curry really steals the show, thanks to the blend of the physical performance and practical effects.

Considering what it could have packed into the runtime, Legend is a dull film. It's also bloody gorgeous, and has a nice Tangerine Dream/Jerry Goldsmith score accompanying the visuals (delete as applicable, depending on the version you're watching). Not one to watch over and over again, I'd still tentatively recommend it to those who just want to sit back and let a visual experience wash over them. 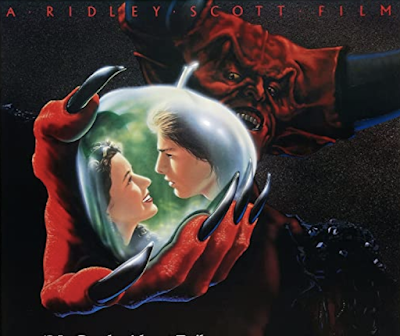