Elba plays Colin, a man who is hoping for parole after serving five years in prison on a manslaughter charge. His parole is refused, with at least one board member reminding everyone that Colin was also the main suspect in the murders of five different women. Heading back to prison, Colin escapes and immediately heads out to get revenge on his ex-fiancée (Alexis, played by Kate del Castillo). He also ends up losing control of his car, and inveigling his way into the home of Terri (Taraji P. Henson), a neglected wife and busy mother of two. And so begins a tense game of cat and mouse.

Well, that's what should happen. What you end up getting is a bit different.

Director Sam Miller has a career full of some quality TV work (including Luther, another show that did great things for Elba), but he tries to maintain a cinematic sheen to the predictable dross here. There's nothing too showy, and he can often let viewers simply enjoy the leads interacting with one another, but there's nothing too static and "stage-bound" either.

Writer Aimee Lagos, with one short and one other feature to her credit (both of which she also directed), is the person who lets everyone down. Her script is trite, drawn out, despite the brief runtime, and often almost outright laughable. The fact that Elba and Henson make the thing even remotely watchable is testament to their talent. Make a list of everything you see in thrillers that make a lead character seem dumb, often just to sustain things until an established end point, and you can check off every item while watching this.

I don't need to go on any more about how good the leads are. I at least knew that I was a fan of both actors before I started watching the film. I didn't expect greatness, but I was hoping for some fun. There are some fun moments, and all of them happen in the scenes that have Elba and Henson working opposite one another in a fluid and flirtatious manner. Leslie Bibb does well in a supporting role (a best friend named Meg), the kind of role that means you just know what's going to happen as soon as you see her billing, and the few other players do perfectly fine, including the young children.

It's not as bad as some ridiculous thrillers, granted, but this is bad. There's not enough room for the plot to have any decent twists and turns, even if Lagos could have been bothered to try harder, and every minute of runtime makes things feel less and less plausible. It's not a painful experience though. It's just a sadly unenjoyable one. 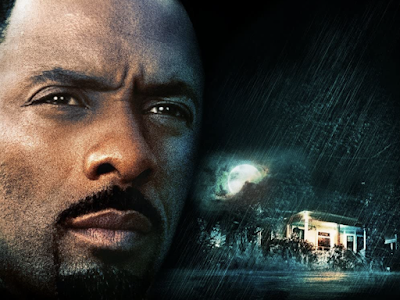