A film about a killer pair of denim jeans may not sound like something you want to watch, but Slaxx turns out to be a great mix of gore and humour, taking direct aim at the world of fast-paced, trendy, fashion. Maybe I was more receptive to it due to the traumatic memory of the time I accidentally picked up some jeans to try on in T K Maxx and discovered they were ALL slim fit (handing them back to the shop worker with the words "I didn't wear them when I was 20, it's really not going to work now I am in my 40s). Or maybe it's just a really accomplished horror comedy.

Romane Denis plays Libby McClean, a new staff member at a horribly trendy clothing store. The staff may keep uttering the company slogan about making a better tomorrow today, but they're mainly just interested in looking cool, impressing the boss, and/or being slim enough for the best fashion choices. Enter the pair of killer jeans, set to kill off people in a number of ways as the staff stay locked in the store to prepare for a manic Monday in which they are set to unveil the latest must-buy.

Directed by Elza Kephart, who also co-wrote the screenplay with Patricia Gomez, I cannot praise this highly enough, considering how it takes such a silly central premise and uses it to have some great set-pieces and make one or two great, albeit obvious, points. Anyone who has worked for a company that pretends to work by a set of ethics that goes out the window whenever not facing a member of the public should find scenes here that ring true, despite the stylised artificiality of the extra-sterile store environment. And those who have worked in retail will definitely recognise the fake smiles plastered on workers as they snipe at one another and prepare to deal with a voracious crowd of consumers.

Denis does a good job as the innocent young woman entering her new job role with an idealism and innocence that you suspect won't take long to be worn down. Brett Donahue and Kenny Wong have fun in their roles, both being mid-to-upper-level management at the store level, and Sehar Bhojani is Shruti, a female staff member who accidentally unlocks a way to discover more about the deadly denims.

Obviously not for everyone, if you give Slaxx a try then you may be surprised by how effective it ends up being. The message it delivers is delivered well, and you get an excellent mix of horror and humour. A couple of deaths are impressive and bloody, while the absurd essence of the thing ensures that you'll keep smiling throughout, even as it tries to push onward to an ending that may end up much darker than expected.

I hope this is the start of a franchise. Slaxx 2: House Of Levis. Slaxx 3: Mind The Gap. Slaxx 4: The Wrangler Strangler. And, of course, Slaxx 501. Kephart and Gomez, you know where you can get a hold of me. 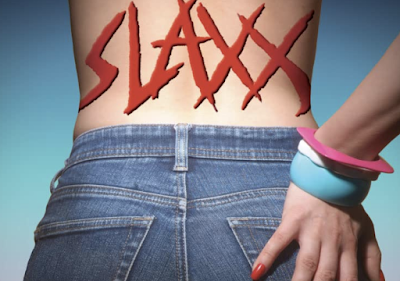