Written and directed by Zoe Lister-Jones, The Craft: Legacy is a film I had been putting off watching for a while. The trailer didn't really sell me on it. Nor did the fact that it was making use of a title that many view as a beloved 1990s teen horror. I have never loved The Craft as much as many others do, mainly because I've never been a big fan of Robin Tunney and I've also never been a teenage girl, but I can absolutely see why so many enjoy it. Especially female viewers. It's also helped immensely by a wonderful performance from Fairuza Balk (although pretty much all of the non-Tunney leads are great).

The Craft: Legacy doesn't have anything that the original had, in terms of working for the intended audience or having any of the cast members stand out. It's not quite as bad as the last incarnation of Black Christmas, but it's close.

Cailee Spaeny is Lily, a new girl in town. She has moved with her mother (Helen, played by Michelle Monaghan) as her mother looks to start the next stage of her life with her partner (Adam, played by David Duchovny). It's not long until Lily becomes the sought-after fourth for Lourdes (Zoey Luna), Frankie (Gideon Adlon), and Tabby (Lovie Simone). Working together, the girls can cast quite a spell or two on those around them.

It's slightly disheartening to find that this movie really is just as bad as the trailer made it out to be. It's a cynical attempt to cash in on a couple of potential markets, and it's extremely lazy throughout. It says something that a few of the better moments involve Monaghan and Duchovny, the main adults, when things should really have been set up to showcase the younger stars.

Not that the cast do a terrible job. They're just poorly served by a script that gives them no chance to make any real impact. Spaeny is at the centre of the plot, but could hardly feel less like a vital lead character. As the other three have to act in orbit around her, everyone suffers. Nicholas Galitizine doesn't do bad in his role, a young man named Timmy who becomes a much more sensitive soul after a spell is cast upon him, but it never has any ring of truth to it.

The fault seems to lie squarely with Lister-Jones, who may have taken this job as a stepping stone to something that interested her more. She doesn't seem to have any handle on the characters, or the material, and the final result is a teen drama with supernatural elements delivered by someone who seems completely disinterested in what's going on.

Given a different name, this would have come and gone without anyone noticing. But tie it to The Craft and there's much more reason to dislike it (not least of which is a third act bit of plotting that will make most viewers roll their eyes). 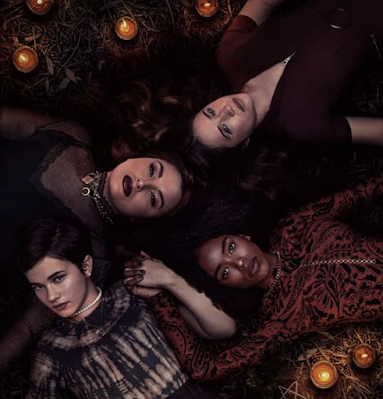