Smokejumpers, they're a special breed. They are parachuted into the middle of raging fire sites and tackle the raging infernos like absolute heroes. Like firefighters, except they're not like firefighters. Certainly not according to the characters in Playing With Fire.

John Cena is Jake, the stoic leader of his team, a group made up of Mark (Keegan-Michael Key), Rodrigo (John Leguizamo), and the fairly uncommunicative Axe (Tyler Mane). Jake has the chance for a big promotion, which would allow him to feel as if all the years living under the shadow of his beloved, departed, father have all been worthwhile. Which makes things even more stressful when the team end up temporarily caring for three young children (played by Brianna Hildebrand, Christian Convery, and Finley Rose Slater).

Absolutely harmless family fun, as predictable as it is amusing, Playing With Fire has an okay mix of youngster causing trouble alongside a number of very enjoyable turns from the adults. As well as those already mentioned, Judy Greer pops up to be a love interest often overlooked by Cena as he tries to focus on his career, and Dennis Haysbert is the man who will make the final decision on the promotion, which means he is due to visit just after the kids should be dealt with and moved from the station by that point.

Director Andy Fickman feels like a good enough person for the job here. He's done family fare before, even if he's also given us Paul Blart: Mall Cop 2, and he's helped by a decent script from Dan Ewen and Matt Lieberman. When I say the script is decent enough I mean that it gets you from A to B to C without any major turbulence or ill-advised tangents. You should know what you're getting with this movie, and you get it.

Cena is fun in his main role, required to look stern and straight-laced until shown how good life can be when you loosen up slightly. Key is hilarious, Leguizamo is a fun addition, and Mane is enjoyably intimidating to look at while having a soft heart. Greer and Haysbert are also pluses, but the latter is really nothing more than the required third-act obstacle/problem. As for the young co-stars, they're bearable. Hildebrand is actually pretty good, but it's not necessary for her to be as annoying or problematic as her younger siblings.

Few of the set-pieces feel as good as they could be, but they're pitched at just the right level for younger viewers, but this moves along nicely enough from start to finish, providing a good opportunity for Cena to grow his audience demographic. Disposable fun, and it leaves you chuckling with some fun out-takes over the end credits. 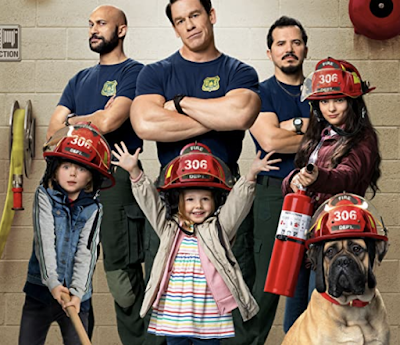