A creature feature about a cast of young people being terrorised by killer beasties, Ticks is a film that doesn't want to do anything more than make viewers tense, and probably a bit itchy. And it succeeds admirably.

A group of troubled teens (well, supposed teens) are taken to a woodland cabin to help them learn how to work together, to take some time to work through their issues, and to generally work on being better young people. There are a couple of social workers in charge, but there are also some drug-growers in the local area, and they have inadvertently increased the size of the local tick population. Ticks aren't nice at the best of times, but they're so much worse when enlarged to the size of tarantulas. Seth Green is the young lead who needs to work hardest to overcome his fears, Alfonso Ribeiro is a muscular young man who goes by the name of 'Panic', and the rest of the cast are a bit less memorable, although that's not to say that there is any issue with their acting.

Directed by Tony Randel, Ticks is a film that makes the most of every aspect, from the decent assembled cast to the impressive practical effects (including makeup effects by the well-known K.N.B. EFX Group). It doesn't need to hide the schlocky entertainment beneath any layers of deep soul-searching or ruminations on the current state of the world, which allows for more scenes that homage Aliens without ever feeling too indebted to it.

The script by Brent V. Friedman is good fun, zipping from one bug-centric moment to the next. Friedman knows the nasty potential of the central idea, and he taps into everything you may want to be presented with in a film about overgrown, deadly ticks.

As for the cast, nobody embarrasses themselves here. It may be weird to see Ribeiro in a very non-Carlton role (considering he'll now forever be associated with that character from The Fresh Prince Of Bel Air), but he's entertaining, Green is as good as ever, just in a slightly smaller form this time around, and Ami Dolenz and Virginya Keehne have some good moments. Ray Oriel and Dina Dayrit are the two other main teens, they do fine, Rosalind Allen and Peter Scolari are the responsible adults, Barry Lynch and Michael Medeiros are less responsible adults (because they just want their drugs to grow well), and Clint Howard is a poor unfortunate who gets severely ticked off (pun very much intended) throughout the movie.

I'm not sure if we'll ever get the special edition shiny disc release of this film that I've been wanting for years, but I'm glad to see it available online for those who love it, and for those who have yet to give it a watch. The simple title and artwork lets you know what you're going to get, but it's arguably much better than it has any right to be. Especially if your recent experiences with creature features have involved films made by The Asylum (they can be fun, but none of them are as fun as Ticks). 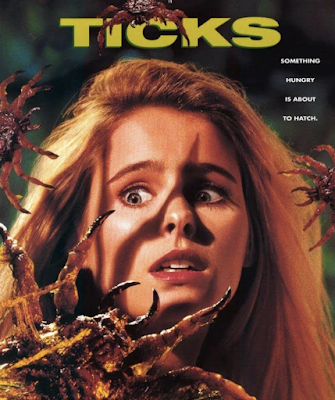