There's a difference between trying to generally avoid reviews about a movie you're going to watch and being completely ignorant of the majority opinion. I like to try and stick with the former, which is why I sometimes know when my own opinion of a movie is likely to be contrary to the opinion of so many others. But it's all subjective, so we should all be able to agree or disagree on various art subjects and still get along, right? Well, unless we're talking about Home Alone 4: Taking Back The House or The Amityville Haunting, both of which rank among the worst movies I have ever seen.

Let me start with a reminder that I didn't really like Black Water, a killer croc movie that decided to use the "based on a true story" line to make up for the majority of it being a bit dull. Lots of people liked it more than I did, and I would already direct you to my first paragraph at this point. Re-read that paragraph before you continue, please. It's only going to become more obvious why I started with those words.

Black Water: Abyss gives us the premise of five friends who decide to explore a cave system, and who then get stuck when some rocks fall and trap them. It's dark, there may be no way out, and the water is rising. And there's a big hungry crocodile somewhere in the water. Part killer croc film and part The Descent, this is a much more satisfying, and simplistically entertaining, movie than its predecessor.

Andrew Traucki returns to the directing duties, flying solo this time around, and the script is by John Ridley and Sarah Smith. Everyone involved knows exactly what kind of movie they want to create, and there are plenty of familiar beats, including a third act that has a preposterous way of placing any survivors back in danger. I know this may have some people hating me, but sometimes there's comfort in the familiar, especially when compared to a film that promised so much and delivered very little. And that's why I was pleasantly surprised by this sequel.

The cast are a selection of decent disposable faces, with identities and relationships becoming a lot clearer in the second half, while everyone tries to avoid the crocodile, plan attempted escapes, and take moments to consider one or two big revelations. Jessica McNamee and Amali Golden are Jennifer and Yolanda, the female leads, and they get some decent moments together. Luke Mitchell is Eric, Benjamin Hoetjes is Viktor, and Anthony J. Sharpe is Cash. Hoetjes is the one character injured early on, which means he has to sit around and wince in pain for most of his screentime, but both Mitchell and Sharpe get involved with some impressively tense moments.

It's maybe about 5-10 minutes too long, and certainly could have done without the irritating final sequence that feels like one contrivance too far, but Black Water: Abyss is pretty perfect fare for those wanting a simple and entertaining creature feature. It's not bringing anything new to the table, but it does everything it sets out to do well enough. I wouldn't rush to revisit it, but I'm glad I checked it out. 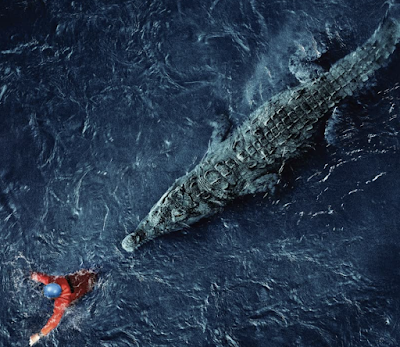