Amazingly, as I rewatched it recently, I realised that I hadn't seen Babe in about twenty five years. I'd rented it when it was a major home release, and remember it being an enjoyable, if very cutesy, time. Based on a novel (The Sheep-Pig) by Dick King-Smith, it actually holds up as one of the best live-action family movies of the past few decades.

Babe (voiced by Christine Cavanaugh) is a pig won at a market fair by Farmer Hoggett (James Cromwell). Destined to be a centrepiece of the Christmas dinner table, Babe instead finds itself helping out around the farm, helping to look after the sheep alongside, and sometimes in place of, the sheepdogs. Developing quite the talent, thanks to some special knowledge delivered by a caring sheep, Babe is seen by Farmer Hoggett as a chance to excel at the upcoming Sheepdog Trials.

There's no place here for grouchy cynics, Babe is a film of absolute sweetness and joy throughout, and it feels all the more refreshing for it. We're more used to modern family movies having sly gags for adults, moments of darkness to make the lighter scenes shine brighter, and a scattering of little details that have become part of the fabric of modern cinema. Babe is very old-fashioned in many ways, absolutely earnest and optimistic throughout, and that heart complemented by the excellent film-making techniques on display (the animatronics, the trained animals, the voice cast) make it a rewarding viewing experience.

Cromwell is a kindly adult figure, almost the lone main character, despite others having some screentime with him, but he's secondary to the animal stars, all of them feeling like very real characters. Babe itself is a curious and polite child, even in the middle of some sequences that are set up to make the poor piglet look like a trouble-maker, and Cavanaugh has a great voice for the role (as does E. G. Daily, who voiced the character in the strange, darker, sequel). Hugo Weaving voices a god, Russi Taylor is a scheming cat, Danny Mann has fun as a mischievous duck named Ferdinand, and you have solid turns from Miriam Margolyes, Miriam Flynn, narration by Roscoe Lee Browne, and some people providing the voices of three little mice who pop up to introduce each main segment of the story.

Director Chris Noonan, who also co-wrote the script with George Miller, hasn't done many other movies that I have felt the urge to seek out, but he can happily hold on to this as the shining star in his filmography. It's hard to think of anyone really hating it, and I can only assume that it's the hardest and coldest hearts that stay that way by the time the end credits roll.

Truly delightful, and an easy one to stick on whenever you want to feel a bit better about the world, Babe is a film that deserves your time. Watch it with kids, watch it with elderly family members, watch it with anyone you can make sit down and watch it with you, watch it on your own. Just watch it, and let it put a big grin on your face. 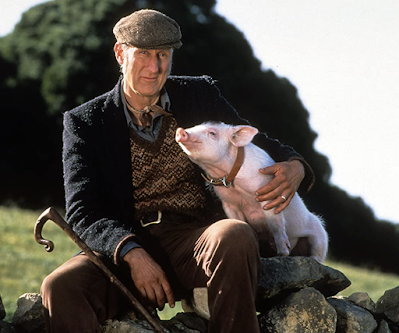