A stark lesson about why we should maybe remember that blindly following the lead of someone who seems to be in a position of authority isn’t always a good thing, Compliance is based on a true story that is all the more worrying and disturbing for being all too easy to understand. And, let me make it clear, although I watched the film with a mix of anger and no small amount of self-righteous smugness about how I would do anything I could do avoid being in that situation . . . I know that I would just as easily be manipulated if I was intimidated by anyone with enough information to convince me that they were on official police business.

Dreama Walker plays Becky, the fast food employee who is taken into the office by her boss (Sandra, played by Ann Dowd) when an alleged police officer (Pat Healy) calls with an accusation of theft. The questioning begins, as does the titular compliance, even as the situation starts to get more and more strange and twisted.

Written and directed by Craig Zobel, this is a hell of an experience to sit through. Viewers are told at the very start that everything is depicted truthfully, without exaggeration (it's hard to firmly believe that, but let's give everyone involved the benefit of the doubt), and that somehow makes it all the more frustrating and angering as you watch someone toy with people over a phone line.

Walker is very good in her role, as vulnerable and confused as anyone would be in her position. Dowd is equally good, harder to sympathise with, especially at times when she gets carried away with the whole process, but also an unwitting victim of the manipulative caller. Healy says a lot of the right things, and the script easily shows just how well this dialogue was planned out, up until a certain point that there is no coming back from. Bill Camp is also worth mentioning, in the role of Van, a man who is shown to resist the easy option of just going along with the whole thing, until he is then seemingly cajoled into action by both the voice on the phone and his partner (Dowd).

Someone once said that you can get in almost anywhere with a hi-vis and a clipboard. You can also get people to do a lot if they fear being arrested. There are many assumptions we make in our daily lives that put us in surprisingly vulnerable positions, and Compliance is a necessary reminder that we should try not to live by those assumptions. Because there will always be someone out there looking to exploit others, for monetary gain, for revenge, or just for their own enjoyment. 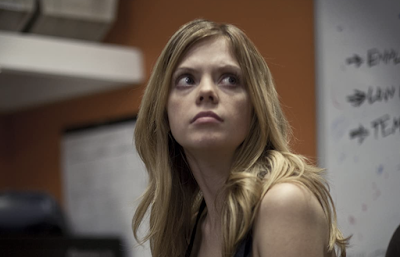