A fairly standard coming-of-age/memoir tale, This Boy's Life is a film you may have heard of before, mainly because of the celebrated performances from Robert De Niro and Leonardo DiCaprio. And it's highly recommended to fans of any of the leads (Ellen Barkin being the third central character).

DiCaprio is Toby, who often likes to be called Jack, a young boy who is used to tagging around with his mother, Caroline (Ellen Barkin), as she tries to make a good life for them both. Caroline meets Dwight (Robert De Niro), a man who initially seems pleasant, if a bit uncool. It doesn't take long to see that Dwight is happy to lie and manipulate to keep himself in a good light, while also keeping everything in his favour, and he and Toby start to clash in increasingly violent confrontations. Toby seems to be a good kid, at heart, but often runs with some of the wrong crowd, but Dwight is not necessarily the good man he keeps trying to make himself out as.

Based on the book by Tobias Wolff, the Toby of the main story (this is his life), and adapted into screenplay form by Robert Getchell, this is a consistently solid drama that is elevated by an absolutely fantastic cast. Michael Caton-Jones directs well, dropping a number of pop hits from the era throughout the soundtrack, allowing the dialogue to reveal so much about all of the characters, and framing many of the confrontations in a way that focuses on the imbalance of power and the physical threat posed by Dwight.

But it's all about this superb cast. DiCaprio makes one hell of a large move away from the daffy fun of Critters 3, easily holding his own alongside the adults, and shows the talent that would put him on the radar of so many other directors. De Niro gives another fantastic turn, unafraid to play a character who is so jealous and petty that he will go to any lengths to make himself look like "the big man". Barkin may have less to do, but she's an essential layer in between the two main men in her life. Jonah Blechman is also wonderful, playing a young man named Arthur Gayle, and you have the cast list filled out by the likes of Eliza Dushku, Chris Cooper, Tobey Maguire, and Gerrit Graham (many of them onscreen for just a few minutes).

The focus throughout stays on Toby and Dwight. The story belongs to the latter, but is so clearly moulded and overshadowed by the former. It's almost like coming up for air when you are reminded that Toby obviously did something to eventually get his story told, and it's extremely satisfying to watch Dwight devolve, little by little, from angry man to whining baby. It is, essentially, the way that so many men like him really are. And not everyone is lucky enough to escape their pleas and clutches. 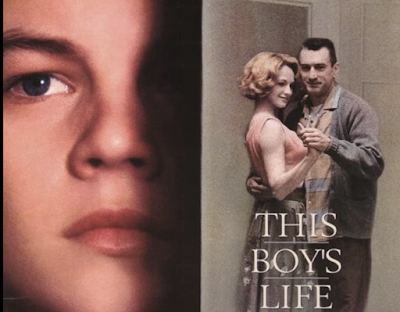