A meteor falling to Earth brings with it some alien beast. It's a common enough sci-fi horror trope, and The Deadly Spawn isn't exactly trying to show itself off as some kind of beacon of sparkling originality. It's a daft, and very enjoyable, film that boasts some practical effects work that remains both amusing and impressive.

The plot is pretty much what I've just typed out in the first sentence. The alien beast this time is a life form that looks like a cross between some mashed together eels and, well, Audrey II. Settling into a nearby house, the creature starts to munch on people that encounter it. One person, a young horror movie fan named Charles (played by Charles George Hildebrandt), discovers that the creature(s) reacts to sound. This saves him, but can that information be passed along to everyone else who may come into contact with the thing? And can Charles come up with a way to escape, and possibly save the planet?

Written and directed by Douglas McKeown, his only film credit, The Deadly Spawn is the kind of derivative nonsense, put together with cardboard, glue, and a whole lot of optimism, that many genre fans should be able to appreciate with a big grin on their faces. Feeling like it rips off everything from The Day Of The Triffids to Alien, it gleefully pilfers so many different elements from so many sources that it transcends the collage of homages to somehow become a new, unique, piece of work. Considering the budget, which I assume was very low indeed (I've seen it listed on IMDb as $25,000), this is a perfect example of invention and enthusiasm making up for a number of potential weaknesses. McKeown does himself a big favour by pacing things perfectly, throwing in enough extra characters to bump up the death toll and showing off the central creation with a huge amount of well-placed faith in the ability of his special effects team.

Hildebrandt is just fine in his role, as are some of the other cast members, but this isn't a film that focuses on the human element. They are there, they do just fine, the script tries, but fails, to make them a little bit more than paper-thin characters, and they then interact with the deadly spawn. I'm not sure how Tom DeFranco, Richard Lee Porter, Jean Tafler, Karen Tighe, et al feel about their involvement in this, it was the only feature film role for many of the cast, but I'd be pretty damn pleased with myself if I could say that I had even the smallest part to play in getting The Deadly Spawn made.

Not something to watch if you want any grit or realism, and not recommended for those who need to see films with a minimum budget to polish every main sequence, this is a perfect passion project that remains entertaining throughout thanks to the sterling efforts of everyone involved. 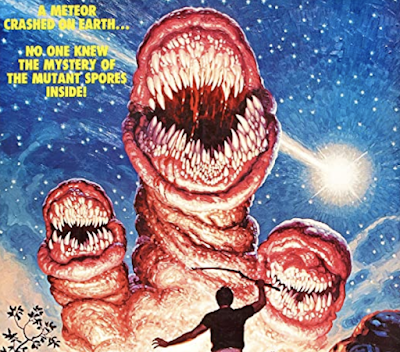