A comedy vehicle for Melissa McCarthy that is once again directed by her husband, Ben Falcone, Superintelligence has a soft, sweet, centre to it that may gain it some goodwill from the right viewer. It's certainly not the usual mix of swearing and pratfalls that people assume is part of every Melissa McCarthy movie.

McCarthy plays Carol Peters, a woman deemed by a number of people to be one of the most average humans alive. Which is why an artificial intelligence system enters her life, erasing her debt and upgrading everything around her, in order to study Carol and learn about humanity. Over the course of a few days it will decide the best way to deal with the human race. Yes, that means that things could go very bad. Carol is also given a chance to make up with her ex-partner, George (Bobby Cannavale), a man about to leave the country in just a few days.

That's all you need to know about Superintelligence. Oh, and the AI is voiced by James Corden, because that was deemed the voice that Carol would respond to best, having been a massive fan of his for many years.

I've said many times that I like McCarthy, more than most people seem to, and I once again like her here, despite the fact that the comedy is often left to many of the supporting players (such as Brian Tyree Henry, a man who becomes flustered when in the same room of the President - Jean Smart - that he greatly admires, or the much smaller turns from the likes of Karan Soni, Usman Ally and Jenna Perusich, and Damon Jones). Carol Peters is supposed to be unremarkable, but she has a good heart, and hopes to one day be able to change the direction of the human race on to a better path.

Falcone directs well enough, and also gives himself a fun supporting role as an agent, alongside Sam Richardson, and he doesn’t seem to warp or strangle the light script from Steve Mallory. There are a number of fun pop culture references (WarGames being an excellent one), the tech side of things is kept simple, it’s easy to show how powerful the AI can be with so much gadgetry around, and the focus keeps returning to the potential rekindling of love at the heart of the story.

While McCarthy is very good in her role, she’s ably supported by everyone around her. I have already mentioned some of the highlights in the supporting cast, but Cannavale also deserves some praise, especially when his role could so easily be seen as the thankless love interest role that women usually get landed with. Kept largely offscreen, aside from one or two moments of visualisation, Corden has fun portraying a version of himself in audio form. And Henry, playing Carol’s friend, and a computer expert, provides a good number of laughs every time he appears.

It’s difficult to think who will enjoy this most though. Those who dislike McCarthy won’t be won over. Those who dislike Corden could be put off. Anyone after a rom-com might hate the tech thriller plot strand, and vice versa. That doesn’t make it a bad film though, not necessarily, but it easily stops it from being a very good one. 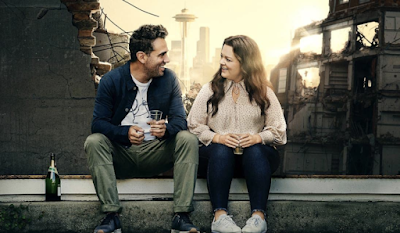