Sometimes a film makes an impression on you because of the advertising. Sometimes it makes an impression on you because of the poster. There were a number of films that became must-sees for me in the 1980s because of both. Two of the most memorable were The Return Of The Living Dead and Mutant. The former has remained a firm favourite of mine since I first saw it. As for the latter, well, it seems to be a film that I remember fondly for no other reason than having seen it at a relatively young age. Because it’s not really a very good film, but it still feels like the kind of thing you should watch on VHS.

Wings Hauser and Lee Montgomery are two brothers, Josh and Mike Cameron, who end up in a quiet little town where some recent unpleasantness has occurred, resulting in a number of deaths. Sheriff Will Stewart (played by Bo Hopkins) seems to suspect something isn’t right, but cannot get close enough to the truth.

Directed by John ‘Bud’ Cardos (who also delivered the spider-centric chiller Kingdom Of The Spiders), Mutant is an acceptable time-waster that suffers from too few attempts to make things properly scary, instead turning the third act into more of an action thriller. This isn’t how the film was intended to play out, according to writers Michael Jones and John C. Kruize (Peter Z. Orion is also credited, but Jones and Kruize birthed the whole story). So what you have is an action movie without impressive action set-pieces and a horror movie without enough atmosphere and scares.

Hauser isn’t bad in the lead role, although the script doesn’t play to his strengths. At all. Hopkins fares better as the Sheriff, playing the typical flawed hero, on this occasion it’s someone who has battled for a long time with alcoholism. Jennifer Warren is good as the doctor who starts seeing the full picture as she puts pieces of the puzzle together, Jody Medford is decidedly okay in her role, Montgomery doesn’t make much of an impression, and many of the better supporting players get to pop up with very pale complexions and murderous intentions.

I cannot suddenly stop having a soft spot for Mutant, all thanks to that poster/trailer combo that had me so keen to see it before I had turned ten years old, but it’s not one to revisit if you are hoping for the viewing experience to match your memory. The first half drags, the mystery element never feels very mysterious, and the third act will make you pine for some simpler action movie fun. 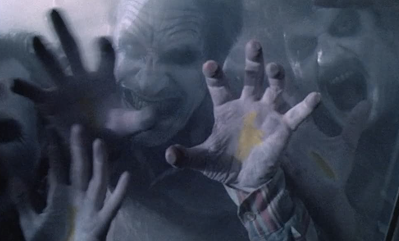