Okay, I guess I should say a bit more.

Gillian Wallace Horvat plays a struggling filmmaker (named Gillian), who is also having a hard time with a friend, Chase (played by Chase Williamson). She starts to plan murders, having been told that she could be very good at it, and then puts them together into a film she hopes will impress those who can help her career.

It's hard to think of where to really begin with my full review of I Blame Society, mainly because there are lots of separate little moments that at least made me smile. It's a bad film though, weighed down by the ridiculousness of a central concept that it never really knows how best to handle. I've seen a lot of people giving this a fair bit of praise, which surprised me once I'd finally seen it for myself.

First of all, Horvat is a great talent. Her filmography is full of some interesting celebrations of different movies (her video documentary shorts cover films as diverse as American Ninja and The Bells Of St. Mary's, as well as some looking at Frank Capra, Cary Grant, and others . . . I assume these are pieces that have been packaged with various features given upgraded shiny disc releases). Horvat is clearly a big film fan, and has decided to try something that can call out, and make use of, the limitations of low-budget, independent, cinema. It just didn't work for me.

The two main problems are the script, co-written by Horvat and Williamson, and the central performance. Try as she might, I just don't think Horvat felt right in the lead role. It all feels like acting throughout, whereas the whole thing could have been better if there was someone who was able to convincingly portray that detached coldness needed for most of the small set-pieces that occur.

Although I can't say just how much effort went into this, and most films take a hell of a lot of effort just to get made, there's also a feeling that everyone involved took the easiest options. A pet peeve of mine is when mockumentaries and/or "found footage" films have lead characters who are just given the same name of the actors. I know it's often used to blur the lines between fact and fiction, and allow for some more spontaneous magic to happen, but it always feels lazy to me. Then you have the supporting cast that are just dragged in and out of the loose storyline when required, none of them really given any time or space to feel like a potentially real person. And the ending is just a culmination of the ridiculousness that keeps being piled on throughout the second half.

You can blame society. You can blame others close to you. But don't blame me if you watch this and end up disliking it. The humour saves it, but there's not enough of it to make it something I would even rate as average. 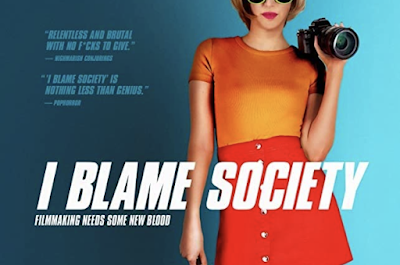