Part Quatermass movie, part Rosemary's Baby, The Astronaut's Wife could easily be titled Rosemary's Space Baby and nobody would complain.

Charlize Theron plays Jillian Armacost, the wife of an astronaut named Spencer (Johnny Depp). While up in space on a mission, contact was lost with Spencer and his flight partner, Alex (Nick Cassavetes). All seems fine when they get back to Earth, although Spencer and Alex are put through a number of tests. Sherman Reese (Joe Morton) thinks differently, however, and ends up trying to warn people who don't want to hear his "paranoia".

The only feature both written and directed by Rand Ravich, and it soon becomes clear why that is, The Astronaut's Wife is a plodding melodrama with no tension, no originality, and one or two scenes that use some ill-advised CGI to create some kind of set-piece highlight.

It also wastes what could have been a great cast. Theron has to watch her husband while looking tense and worried, obviously. Depp isn't in his self-parody stage yet, but it's not a great central turn from him (I think  he's always struggled to play anyone who seems . . . "normal"). Cassavetes makes no impression, while Donna Murphy, playing his wife, is disappointingly underused. Morton is good, as is Clea DuVall (playing the sister of Theron's character), and there are decent little supporting turns from Blair Brown, Tom Noonan, and Samantha Eggar, but Ravich clearly does nothing to help any of them.

At no point does Ravich do enough to make his movie more than a full waiting game between points A to B, to C and beyond, which is a real shame. Not only that, he refuses to then take the other approach that could have been more entertaining, a simple lean in to the potential horror and craziness of the concept. So you get a restrained horror that wants to be a mystery, but has no sense of mystery. The score by George S. Clinton is underwhelming, and there's not even any aspect of the film that is accidentally impressive (from the production design to the cinematography, it's all just . . . there).

Probably forgotten by everyone involved as soon as get settled into the 21st century, The Astronaut’s Wife is best also forgotten by anyone who might think about watching it. It is a big waste of time. Maybe not as terrible as some glossy movies, it’s still criminally dull for almost the entirety of the runtime. 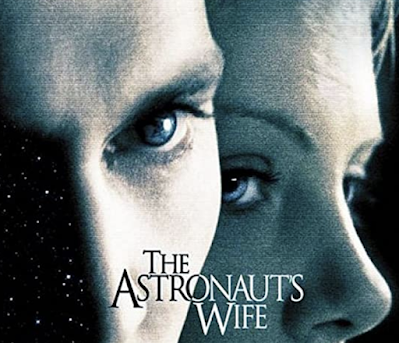