The feature film debut from director Max Barbakow (who has a number of shorts and a documentary already to his name), Palm Springs is a time loop comedy-drama that focuses on two wedding guests who get to know one another better as they try to make the best of their situation.

Andy Samberg is Nyles, a man who seems to know everything that is about to happen, which helps him to make a strong impression on Sarah (Cristin Milioti). After spending a memorable evening together, things start to get crazy when Nyles is attacked by someone wielding a bow and arrow. Crawling into a glowing cave, Nyles implores Sarah not to follow him. Not heeding his pleas, Sarah enters the cave, which takes her into the same time loop that Nyles has been experiencing for a very long time already. Freaked out, obviously, we see Sarah go through a number of phases that Nyles already went through. She is confused, she wonders if death can end the loop, she tries to right some wrongs, and she and Nyles have some fun, in between conversations about the lack of consequences and the meaning of life.

Although Andy Samberg is the male lead here, those who might not always enjoy his schtick should know that this performance is nowhere near his usual full-on Samberg. He's actually perfectly cast, a mix of confidence and understandable fear. Milioti, who I am much less familiar with, is equally perfectly cast. She's likeable, strong, and very capable of pushing Samberg's character towards being a better person. Meredith Hagner is fine as Misty, the girlfriend of Nyles (who we find out very early on isn't being faithful to him), but the only other person who really gets to stand out is J. K. Simmons, playing Roy, a man who ended up stuck in the time loop after a night of partying with Nyles.

Barbakow directs well enough, keeping things lively and clear throughout (markers dotted throughout, of course, and a montage here or there), helped in no small way by the script, from Andy Siara. Although it takes what is, by now, a premise that could be seen as overly familiar, Siara adds some layers to be peeled away on the way to the ending, one or two twists that help to explain different character motivations, and he also does enough in the third act to make the science seem remotely possible.

If you like time loop movies, and I do, then Palm Springs is a worthy addition to the sub-genre. It's a lot of fun, but it also takes some time to remind viewers of why we should value the lives that we lead, whether time seems to march on too quickly ahead of us, or whether we are sometimes stuck with the consequences of bad decisions. Those consequences mean that your life is having an impact, on yourself and on others. Worrying about the time you have available to you means that you have things you want to do with your time that have meaning to you. But, let's face it, being stuck in a time loop for a while would be pretty damn cool. 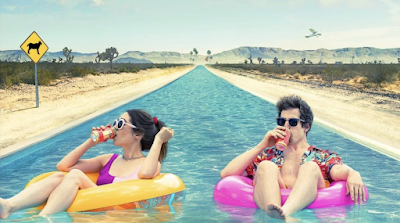