Co-written and directed by Charles Kaufman (arguably best known for being the brother of Lloyd "Troma" Kaufman), Mother's Day is a strange slasher movie that tries to work within the standard parameters of the sub-genre while also having fun with some of the tropes. It doesn't work, let's get that out of the way right now, but there are elements here that remain interesting, especially when you consider that this was a film released at the start of the 1980s, before the slasher movie had really taken the firm hold it would take on the horror movie output of the decade.

Beatrice Pons (billed as Rose Ross) plays Mother, an elderly woman who has a couple of sons, Ike and Addley, she encourages to torture and kill people. They live in a cabin in the middle of some woods, which is very unfortunate for Abbey (Nancy Hendrickson), Trina (Tiana Pierce), and Jackie (Deborah Luce), three women who set out on a carefree vacation.

A fairly "cheap 'n' cheerful" horror, with occasional dollops of gore and moments of nastiness to ensure that horror fans won't feel as if they have been short-changed, Mother's Day feels somewhat like a reaction to the nastier, and more notorious, films that were released in the latter half of the '70s. The Last House On The Left, The Hills Have Eyes, I Spit On Your Grave, et al. Those films often feel like endurance tests, especially in the scenes that show the victims being tortured and brutalised before we get to the more cathartic third acts. Mother's Day, on the other hand, tries to show the villains being despicable and abusive while not dwelling on things for any extended period of time. But when it comes to the inevitable retribution, THAT is when you get more gore and the camera moving in to get closer to the bloodshed.

The acting is a mixed bag, but it's in line with the tone of the material. Pons is a lot of fun as the demented mother, while Hendrickson, Pierce, and Luce all do well enough as the trio trying to stay alive once Ike and Addley have a hold of them. Frederick Coffin and Michael McCleery (both billed under different nnames) are suitably menacing and powerful as the baddies, so blasé about their deadly deeds that they can take time to bicker with one another and/or check on how much mother approves.

If the script, co-written by Kaufman and Leight, was just improved slightly then this could have been a solid slasher that also subverts a number of the tropes already established by the time it was released. Unfortunately, because of the uneven tone and the lack of a well-constructed "Trojan horse" for the main ideas, it just ends up being a bit of a misfire. Those wanting a slasher movie can find many better ones to watch, those wanting to enjoy the comedic elements of it will have to put in a bit more effort than they may feel should be necessary. 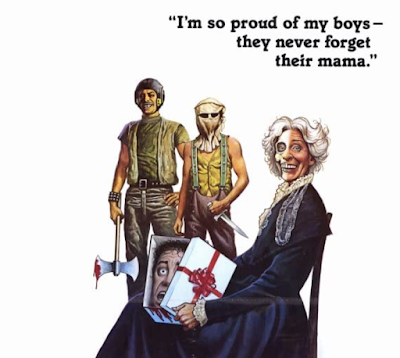