Another horror movie that takes the idea of the very real horror of gradually losing a loved one to dementia, or something very similar, Relic does everything very well, and leads to a finale that is equal parts moving and equal parts creepy (or at least attempting to be creepy).

Emily Mortimer plays Kay, a woman who heads along to find out what has happened to her missing mother (Edna, played by Robyn Nevin). Kay has her daughter (Sam, played by Bella Heathcote) there to help, and it isn’t long until they realise that Edna may no longer be able to live on her own. But is her decline in mental health due to the usual circumstances, or is there something else happening?

Directed by Natalie Erika James, who also co-wrote the screenplay with Christian White, Relic could easily have done gone very wrong, and I wouldn’t mind if the horror genre now moves away from this idea, before some film comes along that completely mishandles the subject matter. James and White take great care to keep fleshing out the heart of the film, the relationships that come with both love and pain, and they help themselves greatly by incorporating a superb cast.

Mortimer is rarely less than great, and this is another very good turn from her, while Heathcote is equally good, giving a performance that balances out the different dynamics you have between being a child and being a grandchild. Nevin may seem to get the easiest role - simply having to veer between moments of clarity and moments of confusion - but she also has to seem like a victim for many scenes, and then occasionally act with what could be malicious intent. There are one or two others onscreen, but it’s largely kept to the three main leads.

Although it’s very good throughout, and gives an interesting twist on what you might expect to happen, this is also a surprisingly straightforward film, in terms of how things unfold and the reveals that occur. It’s a shame that James didn’t take some more chances, with both the narrative and her stylistic choices, but maybe she was concentrating on keeping the tone so finely balanced for the duration.

A solid, if unspectacular, horror. I recommend this, and it definitely fully won me over by the time the end credits rolled. 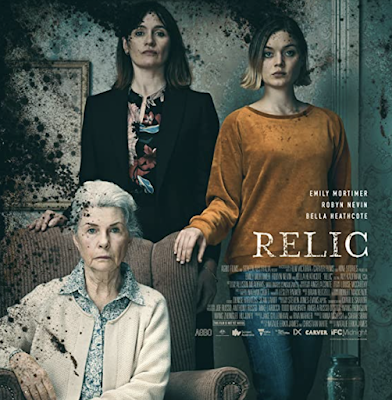