Things didn't bode well for this film. The trailer was bad. Nobody seemed to want it. And I have horrible memories of the last time people tried to make Tom & Jerry more appealing to modern audiences. The characters were talking. Their antics were sanitised. It was a bad period in the history of arguably the most iconic cartoon duo of all time.

But I sat down to watch this anyway, spurred on by a positive review from a friend of mine. And it wasn't really that bad.

Jerry has decided to make his new home in the Royal Gate Hotel, which is set to be the venue for the grand wedding of the year. Chloë Grace Moretz is Kayla, a new employee at the hotel, and is tasked with getting rid of the mouse. That leads to her hiring Tom as a solution to the problem. Things don't go to plan, of course, and it looks like the big wedding could also be jeopardised by the cat and mouse carnage.

Directed by Tim Story, and written by Kevin Costello, Tom & Jerry is a fun mix of animation and live-action delivered by people who at least seem to understand the enduring appeal of the featured cartoons. A number of other animals are also presented in animated form, and the style and behaviour of the animals is nicely in line with our "heroes". Everything is a bit silly and over the top, but it's all set up quite well by the script, and Story directs it all well, zipping along from one highlight to the next, occasionally taking a moment just to focus on some animated one-upmanship. It's also nice to see a journey for Tom & Jerry plotted out that seems to make sense, changing their dynamic while somehow not making them feel unfamiliar to long-time fans.

Moretz may be the lead, and is the one doing the most acting alongside the animation, but she's heading up a decent cast, with everyone pitching their performances perfectly between standard family film levels of behaviour and animated exaggeration. Michael Peña is fun as Terence, a hotel employee who senses something strange is going on, Rob Delaney is the hotel manager, Patsy Ferran is a wonderfully odd Bell Girl, and Pallavi Sharda and Colin Jost play Preeta and Ben, the couple who are due to be married. Tom and Jerry name the movie, however, and they're given many moments to show that they're the stars. As it should be.

Although not on par with the classic cartoons, nor on par with many other fun family movies (live-action, animated, or using a mixture of elements), Tom & Jerry is an entertaining film that gets more right than it gets wrong. Slapstick violence, ridiculous schemes, and a friendship forged from constant battling, it's certainly good enough for any fans who can tolerate seeing them in a modern setting. 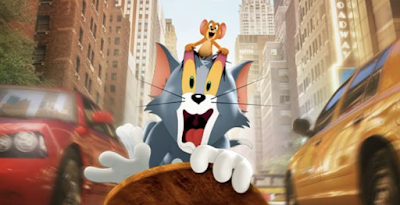