A slick Bruckheimer-produced action movie from the year 2000, Gone In 60 Seconds is an easy film to dismiss when you think of some of the other bombastic vehicles he has put his name to (two of those, Con Air and The Rock, also starring Nicolas Cage). But it holds up really well for what it is, which is a fun 2-hour film with lots of nice cars being stolen.

Giovanni Ribisi is Kip Raines, a young man trying to steal a load of cars for a major criminal, Raymond Calitri AKA The Carpenter (Christopher Eccleston). He fails, which enrages The Carpenter. With a ticking clock, he arranges to get Kip's older brother, Memphis Raines (Cage), on the case. Memphis left that life behind a long time ago, but, as the life of his younger brother is on the line, he reluctantly puts a team together. That team includes 'Sway' (Angelina Jolie), Otto (Robert Duvall), and The Sphinx (Vinnie Jones, in a largely non-speaking role). The plan is to scope out the cars and grab all fifty in one night. That's a tough order, made even tougher by the two cops (Delroy Lindo and Timothy Olyphant) who sense something big about to go down.

Based on the 1974 movie by H. B. Halicki (I've not seen it, no idea how closely the two match up), Gone In 60 Seconds has a decent script by Scott Rosenberg and solid direction from Dominic Sena. They know the right level of passable implausibility to go for, and keep things moving in between nice car moments with some great exchanges of dialogue between characters (particularly any scene involving Lindo and Olyphant). And then, despite taking such a long time to get there, the cars get to shine when they're onscreen. Especially in the finale, involving a Shelby Mustang GT500 given the name "Eleanor".

There are some good montage moments, a soundtrack that has some fantastic choices to accompany the visuals (The Chemical Brothers are on there, as are Apollo Four Forty, Moby, and War), and enough great stunt sequences to please most action movie fans, although they are sparingly spaced out throughout the third act.

Now let’s get to that cast. Cage has fallen out of favour in recent years. I am still a big fan, no matter where on the Cage spectrum of craziness his performance falls, and he became a surprisingly good action movie star once given a shot. The same, more or less, could be said of Jolie, who works very well here as the cool female really into her cars. Duvall, Jones, Scott Caan, Chi Mcbride, Scott Caan and all of the other crew members fit their roles perfectly, Ribisi gets to be slightly bratty, and Will Patton once again delivers some fine Will Patton-ness. Eccleston is the weak link, not as charismatic and intimidating a villain as he could be, but he’s okay. The bigger threat comes from the “heroes” being caught by the cops, headed up by Lindo and Olyphant, who complement one another brilliantly, making a very entertaining double act.

Maybe not as rewatchable as some other movies in this vein, Gone In 60 Seconds is still a very fun ride, using a great ensemble cast to keep everything ticking over nicely before it finally puts the pedal to the metal. 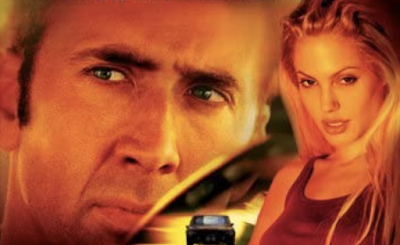