“Under the provision of Title 2 of the 1950 Internal Security Act, also known as the McCarran Act, the President of the United States of America is still authorized, without further approval by Congress to determine an event of insurrection within the United States and to declare the existence of an "internal security emergency". The President is then authorized to apprehend and detain each person as to whom there is reasonable ground to believe probably will engage in certain future acts of sabotage. Persons apprehended shall be given a hearing, without right of bail, without the necessity of evidence and shall then be confined to places of detention.”

That is the very opening dialogue of Punishment Park, a fake documentary written and directed by Peter Watkins. It is a disturbingly prescient piece of work, something even more relevant now than it was back when first released.

The premise stems from that opening. We get to see some young people who have protested, their biased and unfair “trial”, and the consequences of their decision to take Punishment Park over some lengthy jail sentence. Punishment Park ends up being quite the endurance test, almost certainly designed more for the satisfaction of those in authority than to rehabilitate offenders.

People used to say that if you weren’t angry then you weren’t paying attention. Nowadays, if you are not angry then you are being wilfully ignorant. While neither the UK nor the USA are on a par with the worst countries in the world, in terms of human rights and freedoms, things are happening lately that feel worryingly similar to the events depicted here, whether it is state-sanctioned violence and death, people being pre-judged for actions deemed to be against the good of the country, or slavish devotion to any flag.

Absolutely on the nose when it comes to presenting scenes of people overreacting and being shocked by those who do not want to go along with every single act that the government claims is a necessity for the good of the country, Punishment Park is probably one of the most depressing films I have viewed in the past year or two. Because it is so uncomfortably close to where we are now, and where we have been for the past few years. Some may view this and think of it as pure fiction. Others will see it for what it is, a stark warning, a rallying cry to stop willingly handing over so much power to those who may end up abusing it, sometimes believing themselves to be doing good and sometimes simply furthering their own agendas.

I implore everyone to watch it, if only to try and ensure that we don’t fully live it. 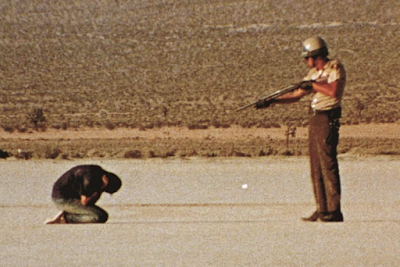