I was optimistic when I started watching The Banishing. Director Christopher Smith is someone I have been a fan of for many years. Sean Harris is a superb actor. And Jessica Brown Findlay is someone I have been a huge fan of since her star-making turn a decade ago in Albatross. All of those people working together in a horror movie about a haunting . . . sign me up.

What you have here is the tale of a young reverend (Linus Forster, played by John Heffernan) who moves into a haunted manor with his wife (Marianne, played by Findlay) and daughter (Adelaide, played by Anya McKenna-Bruce). They have been placed there by Bishop Malachi (John Lynch), a man aware of the troubled past of the property. As things start to become troublesome, to put it mildly, the Forsters may end up seeking help from a local named Harry Reed (Sean Harris), although there's just as much chance of him making things worse.

With a script from David Beton, Ray Bogdanovich, and Dean Lines, The Banishing is a huge disappointment for anyone who watches it for the same reasons that I had. It's a creaky and hokey horror movie written by people that seem to think they're serving up a great mix of the old and the new. They're not. They also seem to think the third act will surprise and impress viewers. It doesn't. In fact, this is a film that would probably be improved by removing any twists or turns. Making a more traditional haunted house movie could have led to it standing out more from the many Wan-iverse-inspired movies we've seen over the past decade or so.  The period setting helps, as the film is set in the 1930s, but nothing else really makes any impression. Even the cast, sadly.

Findlay is as watchable as ever, once again proving that she will add value to any project, but neither Heffernan nor McKenna-Bruce do anything of note. Lynch is the brooding figure who knows what's going on, but reveals nothing. Worst of all, Harris is completely left out to dry, portraying someone who is defined by his whispery voice and the constant knowledge that he is ultimately right while everyone else around him tries to make out otherwise.

Even Smith wastes the talent of Smith. This is the man who delivered a fantastic mix of chills and head-scratching drama with the likes of Creep, Triangle (my personal favourite), and Black Death. You wouldn't know that from this, a barely competent chiller that takes some of the mythos of the infamous Borley Rectory haunting and turns it into something you would expect to be helmed by a stumbling first-timer.

Interested in haunted house movies? There are many others that are more worthy of your time. Interested in  Borley Rectory? You could always read a number of fascinating articles on the place, or treat yourself to the superb Borley Rectory (written and directed by Ashley Thorpe, and a film that feels like the definitive Borley Rectory experience). And if you're simply after a great horror movie then you could always delve into the earlier filmography of Christopher Smith. I hope he comes back soon with something that once again shows off what he is really capable of. 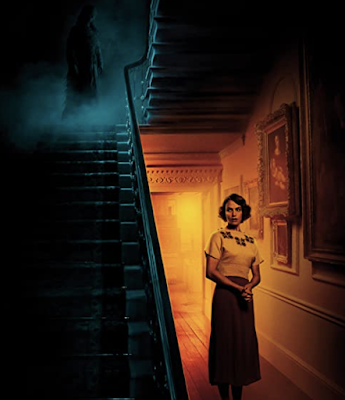