No matter how often it happens, it can always be surprising to see the Netflix effect in action. Everyone and their dog, ironically, seemed to have watched Love And Monsters last week. It was a film on my radar for some time, but I didn't realise it had appeared online until I saw everyone giving their opinions on it. And the general census seemed to be that it was a good one.

Yeah, I don't disagree with the majority here.

Set a number of years after a chain reaction of events that led to our planet being overrun by mutated creatures, we follow Joel Dawson (Dylan O'Brien), a young man who has recently reconnected over the radio comms system with Aimee (Jessica Henwick), the potential love of his life. He decides to leave his own colony to travel the seven days over land and meet her again in person. The only problem is that Joel is not a fighter. He tends to freeze when faced with any nasty monster. Thankfully, he meets a very smart, and helpful, dog along the way, and also meets a couple of other survivors (Clyde, played by Michael Rooker, and young Minnow, played by Ariana Greenblatt) who have skills they can teach him. Growing more and more capable, Joel starts to rate his chances of getting to Aimee. But the threats keep getting progressively more dangerous.

Directed by Michael Matthews (who has a small filmography that doesn't indicate a sudden move in this direction), Love And Monsters is a fun post-apocalyptic creature feature that moves some very likeable characters around in a world chock full of influences, ranging from the obvious (A Boy And His Dog and a number of films featuring Ray Harryhausen effects) to the not-so-obvious (there seems to be a few nods to the famous journey made by Frodo Baggins).

The script, by Brian Duffield and Matthew Robinson, manages to be light and amusing while also maintaining a sense of threat. Our hero is woefully unprepared for so many steps of his journey, but improves on the way. His chances of survival, however, tend to remain the same, depending on what luck he might have on the way. And the comedic approach to the material means that you're not entirely sure that there won't be a way to kill the main character off (temporarily, or for good).

O'Brien is very good in the main role, believably naive and optimistic, and able to step up to some big challenges without suddenly seeming superhuman. It's a world in which brains are just as valuable as any other resource, and O'Brien convincingly plays his role wide-eyed, but not dumb. Rooker and Greenblatt are a great addition to the middle section, and provide some great set-ups that are later paid off. Henwick is also very good, although her character development is undermined by a complete lack of surprise. There are also good turns from Dan Ewing as a yacht captain offering to help a colony move and, best of all, a couple of very talented canines playing a dog named Boy, arguably one of the best scene-stealing animals I can think of from the past decade.

With a finale that even manages to make you think of the wonderful Clash Of The Titans, consistently impressive special effects throughout, a surprisingly positive approach to living in a post-apocalyptic world, and the potential for at least one solid sequel, Love And Monsters is well worth your time, if you like creature features. Although, as far as I'm aware, everyone else has seen it by now anyway. 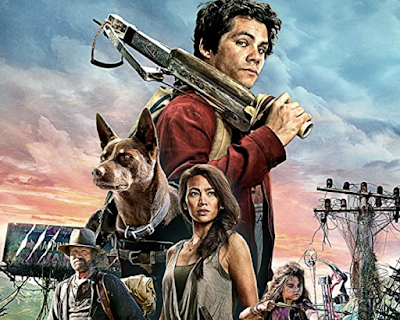